“Political Parties and Elections in the Oil Rich States: Is It Possible to Avoid “Pacted” Democracy?”

The CNIS held its next in the series of “Azerbaijan Democratic Republic ( 1918-1920)  Round Tables” conference on the 8th of February in Baku. The round table was devoted to the political parties and elections and their characteristics in the oil rich post-Soviet states.

Development of the democratic institutions in the post-Soviet oil rich states of the Caspian region faces additional to the common soviet legacies structural obstacles. These characteristics include first of all ruling elite’s monopoly over oil and gas resources, which in the absence of the real mechanisms of the public control further limits development of political pluralism and transparent elections. What are the characteristics of the development of political parties and elections in Azerbaijan, Russia and Kazakhstan? Which electoral system would be the most conducive for the development of political pluralism and party system in such countries?  Is it possible to avoid “pacted”  democracy, when building of democratic institutions either is suppressed or replaced by the contracts (pacts) between the political parties and ruling elites  to get an access to abundant resources? How to design the most effective strategy to counteract these tendencies? What is the role of the civil society in this process?

The head of the CNIS Dr. Leila Alieva opened the conference  with the  analysis of the legal, political, social and economic conditions of the party development in Azerbaijan. Characterizing the legal environment of the political party formation in Azerbaijan, she referred to the study which she authored with the support of the OSCE/ODIHR office on Political Party Regulation in Azerbaijan ( 2012) ( www.cnis-baku.org) and stressed that increasingly restrictive  political party regulation in Azerbaijan since 1993 has created unfavorable conditions for the multiparty system in the country. Although the number of the registered  parties reached 54  ( compare to Kazakhstan’s — 9 and Russia’s – 30) very few of them have a real constituency and only 2 or 3 have an influence on the political life in the country. The legal and policy restrictions regarding environment in which the parties function – such as on freedom of speech and freedom of assembly – has also significantly contributed to undermining of the multi party system. Undeveloped free market and economic monopolies delayed formation of classes of the producers, free from the state control- potential constituencies of political parties and basis for platforms and ideologies. Political motivation of the ruling elite– fear of group mobilization – blocked development of big enterprises, of small and medium business,  and delayed diversification of economy, which would inevitably liberate economic producers. In the oil rich states, stressed Dr. Alieva, the political economy of resource dependent countries leads to the fact the political process from below is replaced by resource based patronage from above, which in Azerbaijan is very strict. Against the background of the delay in formation of the independent middle class, which would constitute the basis for the parties, the exceedingly restrictive legal conditions for party financing has an additional negative impact on their formation. The most recent amendments to the Law on Political Parties on state financing of the parties, although is a welcomed decision, as it was made in line with recommendation of the international organizations, such as OSCE/ODIHR and Venice Commission, was designed in such a way, that only the ruling and pro-government parties would benefit from this provision due to a non-transparent nature of elections in the country. Dr. Alieva has also stressed the impact of all this on the growing personalization of parties and replacement of the competition of ideas by the competition of leaders. She mentioned   flaws in strategies and tactics of the parties themselves and international institutions, involved in trainings of political parties, saying, that the failure to include the traits of the resource  based political economy in the parties’ and organizations’  aid strategies  has led to the low efficiency of aid and trainings. In her analysis she warned that ignorance of the international experience of developing oil and gas resources before the democratic institutions are in place, would lead to the prolonged stagnation and increased probability of the social explosions in the country. She brought an example of the specific way of power change in Venezuela, which Stanford University professor Terry Lynn Karl called “pacted democracy”, when the power and the parties come to the agreement in such a way that it only feeds in political “statu quo”, which re-enforces the effects of the “resource curse” rather than leads to democratic process and free and fair elections.

The guest speaker from  Kazakhstan Victor Kovtunovskii gave a comprehensive analysis of the political party system in Kazakhstan. He characterized the current state of party system in Kazakhstan as depressive. The domination of one-ruling- party and unfavorable conditions for functioning of the other parties have been the obstacles for a real political competition. Currently the parties could be divided in three groups – ruling party, pro-government parties and an opposition. Not unlike in Azerbaijan, the restrictive legislation, non-transparent elections, significantly limited powers of legislature – all this had its impact on capability of political parties.  Regarding nature of power change Dr. Kovtunovskii listed a number of factors which should be in place to lead to a real changes in the country- among them, the state of civil society and its readiness for change, the world oil prices, the state of economies of the big powers USA, EU and China, geopolitical environment( including Russia), presence of eloquent and effective opposition and other.

Dr. Kovtunovskii stressed that elites in post-Soviet Kazakhstan are both interested in changes, and  at the same time are afraid of them, due to the questioned legitimacy of their capital and property. The large percentage of minorities ( 40% ) living in Kazakhstan also contributes to the greater conservatism of the population. He agreed that “Dutch decease”, features of tax collection, corruption from above are peculiarities of the oil rich states, but noted that the influence of the resource curse on the political systems has not  been studied well yet.

The example of countries like Mongolia, which in spite of the rich natural resources, has shown impressive progress in democracy and state building, give grounds for optimism and proves that the policy choices and the political will play a role in overcoming the “ resource curse”.

The nature of elections in Azerbaijan since independence had changed to worse, stressed the next speaker Anar Mammadli, the chair of the  Election Monitoring and Democracy Center. Having started in 1993,   this trend surged after 2003 elections, when the public protests against falsifications were severely suppressed by authorities – around 800 people were detained and arrested. The last presidential elections of 2008 lacked according to the OSCE/ODIHR observation mission report politically competitive environment. The other turning point was beginning inflow of “ big oil” revenues in 2004., which dramatically changed the whole political picture by what the speaker called “corruptionalization” of the political process. The growing number of NGOs with unknown sources of financing, the monthly budget of some of which reached over 500 thousand manats  has started to emerge. March 2009 referendum lifted two terms limits of president in office, which significantly undermined chances of power change through transparent elections. The last municipal elections led to 78% seats going to ruling party YAP and 2010 parliamentary left out two major opposition parties outside of Milli Mejlis, as non-registration of the opposition candidates ( 400 candidates not being registered in the latter)  becomes a routine. The electoral code was amended during the 2000s towards greater restrictions of the competitive environment. Anar Mammadli stressed also the role of political culture, such as parochialism, in consistent worsening of the nature of elections. According to the speaker, as a result of systematically flawed electoral process, the evidence of  public disappointment in the institute of elections  is found in the survey, where more than half of the respondents gave their preference to participation in the public protest  over participation in presidential elections.

The political stagnation in the post-Soviet oil rich states, according to the guest speaker from Russia head of the NiccoloM consulting company Igor Mintusov is based on two keystones:

Election is an instrument of political manipulation and depends on opportunistic interests of elites. In Russia the traits of the political system are similar to those in Kazakhstan and Azerbaijan but with greater elements of competitiveness due to its relatively greater closeness to European culture. One of such peculiarities is that falsifications have its limits in Russia. For instance, in the latest ( December 2011) parliamentary elections the ruling party United Russia got less than 50% ( 49,2%), while the official percentage of support to the presidents and ruling parties in Azerbaijan and Kazakhstan has been growing . According to Igor Mintusov opinion falsifications are beneficial both to the ruling elite and the opposition, as the latter gets an excuse to write off its own mistakes of strategic and tactical character on the falsified elections. Against the background of the passivity of the civil society, the replacement of the governors increasingly bears imitational character, political opposition is divided and marginalized. The main problem in Russia, the speaker stressed is the merger of executive and judicial branches of power, which eliminates the opportunity of the protection of votes and integrity of elections through legal state institutions. In the end, Igor Mintusov shared his experience and methods of participating in electoral campaigns in Russia and internationally. The event was followed by intense discussions, during which in response to the questions the speaker concluded, that for the fair and transparent elections to happen, not only political will of the government, but the will of societies should be in place. 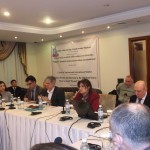 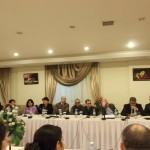 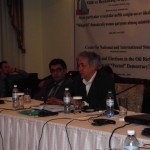 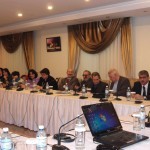 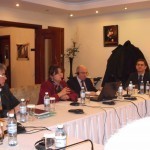 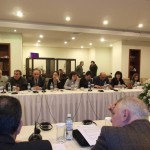 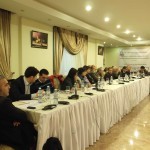 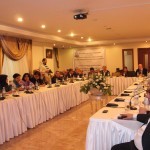