On the 12 of April the CNIS held conference on “How to end merger of political and economic power in the post-Soviet space: lessons of national and international experience”


On the 12 of April the CNIS held conference on “How to end merger of political and economic power in the post-Soviet space: lessons of national and international experience”

This was the third in the series of “Azerbaijan Democratic Republic ( ADDR)  round tables”, devoted to the most actual issues of transition in Azerbaijan.

The first Azerbaijan People’s  Republic has been known  for its high standards of democratic governance and deeply rooted concept of “ conflict of interests”. A century later,  one of the characteristics of  post-Soviet states after 20 years of transition  appeared to be  a merger – to a various degrees in different states —  of political and economic power. This trend  has been creating  serious obstacle  to both key objectives of transition -development of free market and democratic governance. The conference tried to discuss the following questions: Why did  this trend take over in some states of Eurasia?  What are the reasons behind it? Are they cultural, or instrumental? Is it a specific historical stage in development of any state? Are economic or political reasons predominantly responsible for this phenomenon? How is respect for Constitution and the concept of rule of law related to this? What are the institutional and societal  conditions  preventing  such a merger and making legal provisions of “ conflict of interests” a  working  concept? What can we learn from our own history of 1918-1920, our neighboring states — Turkey, Georgia  and  states with established democracies- USA ?

The round table hosted prominent scholars and experts from the USA — Dr. Charles Fairbanks, Turkey- Dr. Ramazan Gozen  and Azerbaijan- expert  Togrul  Juvarli. The first  panel was opened by Dr. Fairbanks who analyzed the factors, which keep the merger alive. He mentioned fear of losing property and going to jail, lack of rule of law making parallel with Saakashvili’s Georgia) , or making reference to Trotskii in early 20th century, tremendous power of compromat  or blackmail  which is much stronger in the post-Soviet space than anywhere else in the world due to the prominence of “moral” issues  for  regime, and eventually insecurity of rulers due to the doubtful  legitimacy of their power.

When speaking about deeper causes of the merger he stressed that this is in no way cultural, but political phenomenon. As Saakashvili proved it in Georgia  with his successful struggle with corruption– corruption comes from politics, not from culture.  The factor  which weakened corruption in the West – is a new impersonality of power . The Soviet Union destroyed a public world. The services were delivered through individuals  rather than categories, so in the post-Soviet period there were a lot of triggers for intensified theft . The other aspect is that in the USSR people were forced to be good and usually after that the period of corruption follows ( like in the post civil war USA).  Where the basis of power is shaky , the rules always try to buy support.

As most of these were Soviet legacies, and its influence is waning, the merger will also weaken.

The other factor is that money gained by dictators through politics ( official position) might be dangerous, as they lack legitimacy. Besides, political corruption might be separated from the system ( US local politics is still corrupt), political corruption may change very quickly and other. Dr. Fairbanks stressed again, that the state is the author ( not the culture) of the merger of political and economic power.

Togrul  Juvarli focused on the merger of  politics and economics  in Azerbaijan.  He stressed that in anticipation of the decline of oil production by the 2016 the government is expected to diversify the economy. This requires participation of people in the economy, but they are in fact consistently isolated  from economy. Modernization , e-government – those reforms are of cosmetic nature , because of the merger of political and economic power in the country. The trend in Azerbaijan shows, that economic functions of the ministries are growing, because they become “owners” and they developed economic interests.

He mentioned the second trend, which is that capital business fights small  business, as it was the case with the Baku steel company. On the other hand, the information on the business is getting restricted – through such as the recently adopted law on access to commercial information, while so strongly required laws on state sales and competition code are stuck in the parliament.

The speaker suggested two ways out: legalization of the capital and defining our place in the civilizations ( identity).

The speaker from Turkey Prof. Ramazan Gozen gave an overview of three major approaches to economy –liberal, Marxism, economic  realism.  He described Turkey to experience the influence of all  three models.   Turkey since 20s has transformed from semi-Marxist to liberal model. Traditionally in Turkey the concept of state as the centralized economic  and political power  has been dominating. As an example he referred to  the fact that in 1915 in Ottoman Empire  80% of all companies were private. The management however was in the hands of sultan, who gave these companies  for rent to the foreigners. This was a private property under  the state control. This stimulated FDIs of such big companies as BP, Coca  Cola, General  Electric etc.  In the end of 20s to 1950s – the influence changed from liberal to Marxist, and during the Cold War period – again towards liberalism. Westernization in this process played an important role. The  In fact, stressed the speaker, the history of Turkey is a competition between the Kemalist political forces in the center with economic religious forces in the periphery.

The transformation of the Turkey into a liberal model  was promoted by the following political leaders —  Menderes, Ozal and Erdogan.   The 4 military coup’s  d’etats were also promoting a centralized state. Turkey does not have a totally liberal economic model, but it completely moved away from the half-Marxist one.

In Turkey’s modern history none of the political leaders were rich men. The respect for Constitution and the rule of law are another important factors contributing to the separation between economic and political power.

The presentations stimulated an intense discussions. An expert  Dr. Zohrab Ismayil stressed the increasing role of state in Azerbaijan’s economy  by referring to the substantial investments in the state owned companies instead of the process of privatization. Dr. Zardusht Ali-zade  noticed that government is indeed thinking in Marxist terms, that economics is key to politics. Unlike the 90s, when the ministers got enriched through corruption, in 2000s they all became businessmen – owners of big holdings. The economic and political power has merged and got criminalized. That’s why new draft law on the conflict on interests for bureaucracy was withdrawn from the discussions in the  parliament.  The official privatization stopped, but the intense unofficial privatization is going on.

Togrul Juvarli  suggested, that changeability of the political leaders is one of the key ways  towards separation of political and economic power. According to Dr. Ramazam Gozen, democratization was a critical factor in Turkey promoting this separation. 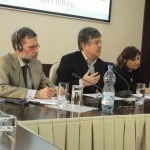 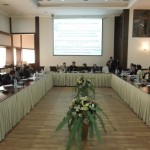 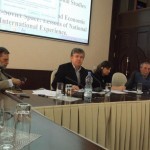 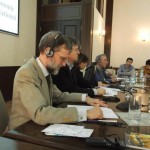 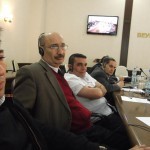 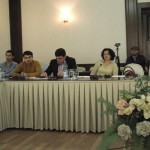 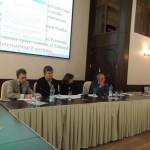 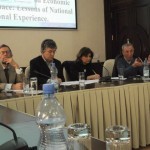 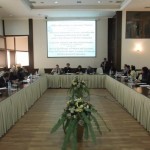 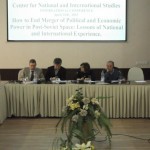 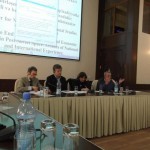 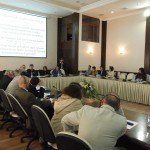