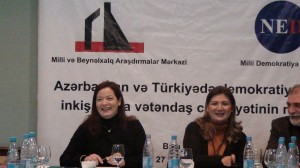 On February 27 Center for National and International Studies organized and held a conference on the topic “ Civil Society’s Role in the Development  of Democracy in Azerbaijan and Turkey” in the ISR Plaza. Aicha Ergun, Deputy-Director for Black Sea and Central Asia of Ankara University of Turkey, and several well-known representatives of the Azerbaijani civil society took part at this conference.

Leyla Aliyeva, President of Center for National and International Studies opened the conference and informed on modern democratic development of Azerbaijan and the civil society’s role in this development.  In her speech she emphasized that “today, there exist two conflicting opinions on the civil society’s role in the development of democracy. On the one hand, some people emphasize that the civil society has been strengthening recently. But some analysts persisting on slackening of democracy in Azerbaijan try to prove the weakness of civil society. Today, we have gathered to clear up this or other questions”, and then she gave the floor to Aicha Ergun.

Aicha Ergun began her speech with historical excursion to establishment of civil society and its development in Turkey. “Though there were a number of civic organizations in Turkey up to 1980s, they could not be named as “civil society”. At that time one could meet with different names such as organization, club, circle, etc. But all of them were acting on voluntary bases. Upon the military coup happened in the early 1980s, non-governmental organizations engaged in human rights and gender issues were established”, said Aicha Ergun. According to the Turkish scientist, in the modern sense of the word, non-governmental organizations in Turkey established in large numbers in the early 2000s. “In the early 2000s the civil societies began to act having their own financial resources. From that time the process of Turkey’s accession to the international organizations and implementation of different projects started “, emphasized Ms.Aicha Ergun.

“Today, the civil society should be more active, because civil society is a real base for democratic development of the country”, said Hikmet Hajizade and yielded the floor.

Rashad Shirin, a young representative of the civil society emphasized in his speech that now the civil society should approach to the solution of the issues practically and it should define “what and how to solve.” He sees the way out of the situation only by establishing “thought and thinking” centers. According to Rashad Shirinov, there was no such kind of center in the country. Maybe someone established such center, but there was no any thinking center up till now that could affect the thinking of the people on a mass scale”, emphasized Rashid Shirinov.

At the end of the conference Leyla Aliyeva thanked the guests who had accepted the invitation and took part at the conference, and made closing speech.

The conference was held by support of National Endowment for Democracy (NED).