The key topic of the discussion was democratic values and human rights in the region and EU’s involvement as a driving force for democratic reforms in respective EaP countries. Henri Malosse stressed the importance of EU institutions being more proactive in the region and in general avoiding double standards in treating EaP countries and avoiding the situation when the policy creates divisions in the countries. He would like to see more progress in terms of visa liberalisation from the EU member states and sees big value in involving various civil society stakeholders in the reform process.

Philip Mikos stressed that there are positive developments in the EaP since 2009 though some objectives indeed have not been achieved. He talked about the progress with Georgia and Moldova in terms of visa liberalisation process and steps on creating open trade area with them. Another achievement is that civil society has become an integral part of dialogue going on in some of the EaP countries. When talking about the new Multiannual Financial Framework 2014-2020 he stressed that country support will be tied in with progress in reforms (as assessed in the Annual Progress Reports) and ‘’the more for more” principle will continue to be the key. The official also mentioned that the programme will support municipalities in a structured way and stressed the importance of involving civil society in planning municipalities’ budgets. In general the official stressed that in comparison with the previous programme the amount of bilateral support will increase as well as the support for the civil society.

Leila Alieva warned on the reversibility of the situation in some EaP countries, stressing the recent tightening on the rules of the NGOs in Azerbaijan, as example of EU’s lack of involvement in human rights issues without the crisis. EU should pay greater attention to the institution building at the grassroot  level and  further increasing role of civil society. Lack of social transformation is one of the major problems, which EU should address. She suggested that Euromaidan has proved that civil society is the true partner of the EU in the process of integration and that reliance on the official level relations, as expressed in closed nature of negotiations of the agreement, is futile and can easily be thwarted. Mrs Alieva suggested that in some countries like Azerbaijan, the policy of engagement should be revised, as it does not prevent human rights abuses, political prisoners and restrictive laws. The EU should not limit its relations with such countries only by cooperation, as this would mean overlooking significant societal pro-European attitudes and reform potential. The agenda of democracy should not be sacrificed for any pragmatic interests. The fact that restrictive laws in Azerbaijan were adopted consistently and step by step, unlike in Ukraine, where they adopted at once, does not make them less destructive to the democracy.

According to Jan Pieklo, the EaP has achieved one big success – strengthening the civil society in the region what is demonstrated by the events in Ukraine. The speaker talked about the need for engagement with the Russian civil society stressing that concessions to Russia will not work and that support to the EaP countries to counteract the pressure is needed. He also pointed out the need for the targeted sanctions (travel bans and assets’ freeze) on Ukrainian authorities by the EU in cooperation with the US and Canada who already introduced the sanctions.

The speakers emphasised the long way that Eastern Partnership has gone and regard the EaP is an important sign of EU recognition of the 6 countries people’s capacity to reform, however it is  clear that challenges remain. Among lessons learnt for the EU was mentioned the absence of membership perspective for EaP countries as a negative factor and the need for a proactive agenda with Russia.  An important factor that would contribute to the success of the policy as mentioned by Jeff Lovitt, is public information campaigns both in the Eastern Partnership countries and the EU member states that would explain the essence of the Association Agreements and processes in the frames of the Eastern Partnership. Mr Lovitt also mentioned the importance of values and the EU being consistent in applying sanctions to politicians in all Eastern Partnership countries who cross the line. The EU must back this up by insisting that all partner countries sign a Charter of Fundamental Rights and Freedoms – enshrining promotion and protection of human rights, freedoms of association, assembly, and speech, safeguards for independent media, and the right to participate in free and fair elections. Any infringement of the Charter – a new initiative now being developed by the Civil Society Forum – should trigger EU sanctions. 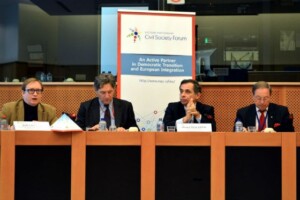