CNIS held a Conference in Hajigabul City on “Formation of the State, Based on the Rule of Law : Azerbaijan and Turkish Practice” 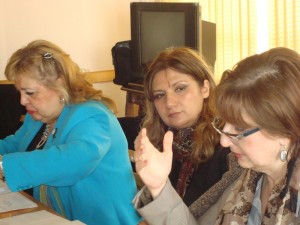 On April 3 the Center for National and International Studies held the conference “Formation of the State, based on the Rule-of-Law: Azerbaijan and Turkish Practice” in Hajigabul city. Dr..Zehra Odyakmaz, Law Professor of Gazi University of Turkey, experts from Baku  and representatives of civil society of Hajigabul  participated at the round table.

Dr. Leyla Aliyeva, head of the Center for National and International Studies opened the conference with welcome speech and emphasized that the main purpose of the conference is to study and compare an experience of the state building in transition periods of Azerbaijan and Turkey and to review them in the historical context. “As far back as 92 years ago when the Azerbaijani Democratic Republic was established the laws adopted by the government left far behind the laws of many European countries. For instance, the laws on equal voting women’s rights were adopted in France only in the 50s of the last century and in Switzerland only in the 60s”.

Dr. Irada Baghirova, a historian, spoke about the formation of state, based on the modern  rule of law,  in Azerbaijan and stated that in Azerbaijan it began at the end of the 19th century. “At early 20 century Baku Municipality had already operated in Baku. But today there is no any Baku municipality…”. She stated: “The issue of laying of the water pipe to Baku was discussed for more than 10 years and all discussions were highlighted in the mass media. And it is another striking demonstration of the rule-of-law state.”

Speaking about the development of the  rule of law in Turkey Ms.Zehra Odyakmaz stressed that: “The judicial system of Turkey is excellent. 8 independent courts which do not interfere in each-other affairs and established as a pyramid system  operate in Turkey. This judicial system is inherited by us from Anatolia Seljuks and then it had been improved in the periods of Ottoman Empire and the Republic of Turkish. But the only problem is human factor. Due to lack of judges or professionalism, its implementation faces some problems. Formation of qualified and honest judges begins from the family, and then it continues at school and in professional activity: — emphasized Prof.Ms.Zehra Odyakmaz.

After the speech of Mubariz Khalilov, a scholar from Hajigabul city, Dr. Alasger Mammedli, a lawyer, characterized the development of the rule of law in Azerbaijan in the post-Soviet period and the controversies related to this process.

At the end of the conference Leila Alieva thanked the guests who had accepted the invitation and took part at the conference, and made closing speech.

The conference was held with support of National Endowment for Democracy and German Marshal Fund of the United States.