NATO: Political and military alliance of the 21st century 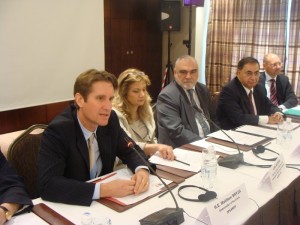 Should Azerbaijan join NATO? It was the topic of the roundtable on «NATO: Political and military alliance of the 21st century» organized by the Center for National and International Studies and the Embassy of Romania , NATO Contact Point Embassy in Azerbaijan on June 15, 2011.

In her opening speech at the conference Leyla Aliyeva, President of the Center for National and International Studies emphasizes that in 1990s Azerbaijan was weaker, but had a consistent and firm policy of rapprochement with NATO.

The leader of the Democratic Reforms Party (DRP), deputy Aim Mollazade noted in hisreport that after the restoration of Azerbaijan’s independence, the main political forces of the country got consensus about Euro-Atlantic integration.

However, according to Mollazade, to join the NATO Azerbaijan needs time, a new generation of managers should appear as well as developing of democratic institutions is needed.

As an example he mentioned the experience of the «Orange Revolution» in Ukraine, after which it seemed that Ukraine is ready to join NATO, however five years later another mood prevails in Ukraine. Georgia’s untimely will to join NATO, and failure at the Bucharest summit of the Alliance resulted by August events in 2008, and Tbilisi was defenseless. Azerbaijan which refrains from such treatment, protected itself, Mollazade said.

The U.S. ambassador to Baku, Matthew Bryza, speaking on the new policy of NATO cooperation said after the Lisbon summit its doors are open to democratic European countries, including Azerbaijan, if they meet the criteria of the organization. In the specific case of Azerbaijan, Bryza said: «Lately, I have not heard about Azerbaijan’s intention to join NATO. I have heard that Azerbaijan wants closer integration with NATO.»

According to Bryza, Azerbaijan’s position is due to the national security interests in the neighborhood with such countries as Iran and Russia and the conflict with Armenia.

Nevertheless, in 1999 Azerbaijan granted its airspace for NATO operations in Afghanistan, and it was an important geo-strategic decision. Bryza also said that the USA support democratization processes in Azerbaijan, and there is positive progress, such as the release of the journalist Eynulla Fatullayev.

The Head of EU mission to Azerbaijan Roland Kobia said that Azerbaijan’s joining the NATO and the WTO is a voluntary choice of the country. However, reforms and joining the WTO would make possible signing a free trade agreement with the EU and privileges on the European markets. According to the member of Milli Majlis Rasim Musabeyov, Azerbaijan’s cooperation with NATO can develop even without joining the Alliance. Uncertainty around Azerbaijan’s joining the NATO is connected not only with unclear position of the authorities, but also absence of certainty in the position of the Alliance itself. Regarding the events in August 2008 Musabeyov said that USA and NATO were able to stop the Russian tanks and did not let them enter Tbilisi. At the same time, these events have shown that NATO is not willing to solve the problem of restoring Georgia’s territorial integrity. Expressing his attitude about Azerbaijan’s joining Non-Alignment Movement, Musabeyov stressed that this step testifies not only the desire to distance itself from NATO, but also unwillingness to join the Collective Security Treaty Organisation (CSTO).

NATO does not show sufficient interest and understanding to the problems of Azerbaijan. Thus, when Armenia threatens to attacks oil infrastructure in Azerbaijan, NATO not only refuses to supply appropriate defense systems to Azerbaijan, but also calls to cut military expenditures. In this situation Azerbaijan has to seek cooperation with Israel, or Russia.

In general, perspectives of cooperation with NATO are positive. According to results of pubic polls, over half the population supports the country’s integration into NATO and only 10.2% support membership in the Alliance. In addition, Azerbaijan’s extensive military cooperation with Turkey also strengthens the relationship with NATO.