Provision of Freedom of Assembly Crucial for Tolerant and Pluralist Society, European integration 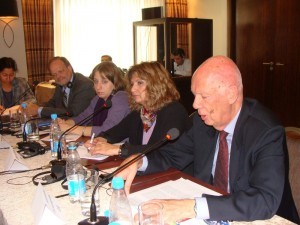 The situation with democratic freedom in Azerbaijan, especially a freedom of assembly was the main subject of the conference on “ Role of Freedom of Assembly in Civic Activism, Political Pluralism and European Integration”, held by the Center for National and International Studies with the financial support of the World Alliance for Citizen Participation CIVICUS (South Africa), at the Hyatt Regency Hotel on November 1, 2011. The conference brought together prominent human rights activists, lawyers and defenders, political parties, NGOs, journalists and international organizations. The event gave a rare opportunity for the stakeholders to openly speak and discuss most pressing problems in this area.

Leila Alieva, President of the CNIS has opened the conference with a foreword “Although our Center is a research institution, we believe that the topic of the conference should concern any institution and individual  in Azerbaijan, because this is one of the fundamental freedoms of democratic society and is in our Constitution”. Alieva commented on the deteriorating situation with human rights, and in particular, the arrest of participants in peaceful demonstrations, the pressure on lawyers, the violation of property rights of citizens, including human rights defenders. She stressed, that all freedoms are closely connected to each other, and limitation of one type of freedom has inevitable effect on the others.

The Head of the Council of Europe’s representation in Baku, ambassador  Constantine Yerokostopoulos, noted that despite the notification system in Azerbaijan, the organizers of rallies and other actions face problems, and risk being detained, arrested and fined.

According to Yerokostopoulos, events in Baku in March-April showed that Azerbaijan does not fully comply with its obligations to the Council of Europe on the freedom of assembly, undertaken 10 years ago.

Head of Politico-Military Unit of the OSCE Office in Baku, Mr. John MacGregor, stressed that “the State should always seek to facilitate and protect public assemblies at the organiser’s preferred location, and should also ensure that efforts to disseminate information to publicize forthcoming assemblies are not impeded”.

Mr. MacGregor reported on the international standards on freedom of assembly, which guarantee everyone the right to participate in peaceful assemblies. Restrictions on freedom of assembly must be proportionate and not violate the fundamental right to hold peaceful demonstrations. McGregor said that the restrictions must be justified and submitted to the organisers in advance so they had the opportunity to appeal those denials in court. In addition, the state must ensure the safety of rally participants. John Mad Gregor more specifically focused on the OSCE  Guidelines on Freedom of Assembly, which will be translated into Azerbaijani language by January 2012.

Ms. Olexandra Delemenchuk from the Center of Civil Liberties (Ukraine), member of the Eurasia Idea Network., talked about the experience of achieving freedom of assembly in six post-Soviet countries, included to the “Eastern Partnership”. Actually, the problems with freedom of assembly embrace almost all the EaP countries. “Even Ukraine, which until recently was considered the most democratic and advanced country among the countries of the Eastern Partnership, is now experiencing a deep crisis in the sense of ensuring democratic freedoms”, stressed Ms. Delemenchuk.

She described the situation there as “one step forward, two steps back.”  These countries, which join the new international initiatives at the same time, have tightened their legislation. In her view, the most successful strategy is unity of representatives of various sectors of civil society,or cross sectoral networking. Another way she suggested was to initiate a mass litigation of appeals to the European Court for the violation of the rights and freedoms of citizens.

Ms. Delemenchuk also talked about the positive experiences of civil society in Belarus and Armenia, which created the so-called “Foundations of Stability”. These funds are financed by the European Commission and NED (National Endowment for Democracy) and are used to support the families of those arrested at demonstrations, medical assistance to victims, etc.

The leader of the “Musavat” party Isa Gambar noted the necessity of such kind assistance by international organizations to Azerbaijan, where recently 20 political prisoners have emerged.  But he also reproached the EU, OSCE and other structures in continuing to fund ineffective projects on “democratic enlightenment.”

Ali Kerimli, a  leader of People Front Party objected to the notion of one representative of the international organization that there should be an extreme situation in the country to make this organization to react or apply sanctions, and asked what else should happen in Azerbaijan, to recognize “an extreme situation, when one of two dictatorships in Europe functions in Azerbaijan (the other one is in Belarus). The authorities do not even give a visa to PACE Rapporteur on political prisoners, Kristof Strasser,” he said. “Why the energy issues are always dominated in the negotiations with the government and why the discussions about the provision of basic democratic freedoms are always ignored by European officials?”, stressed Ali Kerimli in his speech.

In their responses, the representatives of OSCE and Council of Europe stressed that they can only identify the problems and urge the authorities to solve them. The representative of the Council of Europe pointed to the complexity of such efforts, since decisions are often blocked by groups of states, supporting each other. In his view, such solutions are possible in special – extreme cases.

The participants offered to prepare a special appeal to the Catherine Ashton and outline the expectations of the Azerbaijani people from her official visit to the country.

Chair of the Legal Enlightenment Society, Intigam Aliyev, drew attention to the shortcomings in the law itself. In particular, he proposed to delete from the law- prohibiting demonstrations on the days of important public events of international importance- because similar actions take place in Baku almost every day. He also reproached the international organizations in their compromise with the authorities. Once their representative  told us  ” to be glad that the situation in your country is not like in Nigeria” and accused us of “not being constructive.” Just such a behavior of international organizations has led to the closure of foreign NGOs in Baku now.

Head of the Sumgayit Democracy and Human Rights Resource Centre, Asabali Mustafayev, focused on the political nature of the arrests of activists in the rallies in March and April, and stressed that the harsh sentences were inappropriate. He stressed the changed nature of the court proceedings nowadays. While in the past the prosecutor would support their charges against protesters  with “ evidence”, now they do not even bother to bring an evidence. He also noted the cases of tortures of detained and arrested.

Political parties, activists and NGOs urged the international organizations working in Baku not to compromise their principles and not to adjust them to the local conditions. One of the discussants even said, that when  international representatives visiting the country  do not meet political prisoners, hail the government for reduced terms for them, or are not strict enough in their assessment of the situation it creates an impression of the corruption of the foreign institutions. One of the  major question of discussions was how the international organizations can increase their influence on the improvement of the situation in Azerbaijan. The perception of such a fundamental freedom as freedom of assembly and its violations  is very different by the authorities and by  the society. Something which is perceived as natural aspect of human freedom by the civil society is perceived as illegal, type of hooliganism, or as a derogative – the expression of opposition by the government, even by those, who are in charge of human rights.

The role of media in the freedom of assembly was covered by the  director of   the  independent  News Agency Turan Mehman Aliyev. He noted that there is some positive changes in treatment of journalists at the meetings, as compared to the previous years. However, there is a difference in how newspapers are covering realization of the freedom of assembly – very few can cover them in unbiased and objective way.

Arzu Abdullayeva, a prominent human rights defender and the chair of the national chapter of Helsinki Assembly, focused on the issue of how effective  cooperation between the government, NGos and international organizations can be arranged to promote freedom of assembly. She stressed that for that to happen the parties ( government and the society) should have a will, possibilities, capacity and resources. Assessing the presence of political will,  she stressed that there was a specific NGO’s  proposal to have regular hearings in the parliament on the situation with human rights with participation of human rights activists and defenders, but the authorities.

According to Abdullayeva, the population has also changed and as a result of the policies  is driven by apathy, fear, rigidity and indifference. The cooperation has also different connotations.

While government understands cooperation as a way of “co-opting” civil society, using oil revenues, the civil society is approaching this cooperation with cautiousness and distrust.She called for unity between all layers of society and cooperation in addressing most pressing issues in the area of freedoms.

The participants expressed their comments and suggested their additions and corrections to the text of recommendation and appeal. They expressed their hopes, that the state of  freedom of assembly and the situation with political prisoners will  always stay in the center of attention of the society, and agreed to consolidate their efforts  in this direction.