A conference Energy Security in the Wider Black Sea region- National and Allied approaches was held in Plovdiv, Bulgaria 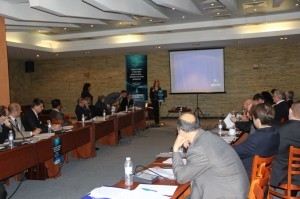 The Center for Black Sea Security Studies (Sofia) and  the  Center for National and International Studies ( Baku) from the 10th of November to the 13th of November  in Plovdiv, Bulgaria, jointly held  the conference“ Energy Security in the Wider Black Sea region- National and Allied approaches”. The conference was supported by the NATO science division as a Advanced Research Workshop- ARW and attracted participants from 13 member states and partners of NATO. The workshop was  directed to the research of the crucial aspects of the energy security and the role of NATO. The conference covered the issues  such as energy security as part of the national security concepts,  transnational energy projects in the Central and Eastern Europe and  Wider Black Sea area, national approaches to energy security, critical infrastructure aspects of energy security, scientific and industry support to finding sustainability and alternatives in energy security. In their welcoming remarks the co-organizers of the conference Admiral Emil Lyutskanov and  Dr. Leila Alieva stressed growing importance of the energy security and necessity to explore, in accordance with  a few NATO documents, in more details the possible role of NATO in  the energy security and noted challenges associated with this role. The participants discussed differences and commonalities the energy security of the states – producers, -consumers and transit states. NATO should start promote strategic approach to the energy security, said the Ambassador Poptchev, advisor to the Bulgarian Ministry of Economy, energy and tourism. The  speakers stressed the growing role of South East European energy market , importance of  diversification  of energy sources and routes/ The role of NATO, as which might be important in information sharing, protection of critical infrastructure, creation of multilateral framework ( Center ) for consultations on energy security issues and other.

Professor of the Baku State University Bakhtiyar Aslanbeyli  described the Azerbaijan’s critical infrastructure related to the oil and gas development and transportation. The valuable commentaries were also provided by the other Azerbaijan participants- Ilham Shaban and Elkhan Mehdiyev. The results of the workshop will be reflected in the book planned to be published next year.