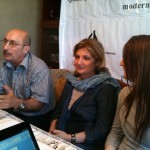 Baku, June 2, 2012. On June 2, 2012 Center for National and International Studies held  a conference on “Modernization of Azerbaijan and Turkey in the context of global processes «in Sheki.

Leila Aliyeva, President of CNIS, in her opening speech stressed, that “we conducted our first conference in the framework of this project in Sheki as well. Today, the democratization and modernization processes are topic of special interest. For example, before the Arab spring there was an opinion, that modernization is more typical for East, especially for Arab countries, then democratization. However, according to liberal democracy, the democratic values are universal and are not depend on East or West criteria. “According to the new published report by UK Foreign Affairs, Azerbaijan is considered as a country with relative modernization without democracy”, stressed Leila Aliyeva and noticed this situation as a dangerous.  “Because this one causes the leader legitimating   crisis”, summarized Leila Aliyeva.

Turkish guest, a researcher from Ankara University Dr. Nazan Çiçek stated the development of the western science in the frame of orientalism and explained the modernization as approaching to Western standards. “Modernization does’n mean approaching to the new technologies such as machines, mobile phones or nuclear technologies. It’s mean also law compliance, loyalty and adhering the democratic values”, stressed Dr. Nazan Çiçek.

Zardusht Alizadeh, well-known journalist and civil society activist, in his speech emphasized that “from the ancient times Eastern countries were the centers of development. Even ancient Greek philosophers and scholars were considered to be wise after a visit to East. Indeed, the Muslim East has always been a center of the universe. For instance, since the inception of Islam has existed an  Advisory body named Mashvarat Shura etc.”. stressed Zardusht Alizadeh.

Speaking on modernization in Azerbaijan at the present stage, Zardusht Alizadeh noted that “modernization first of all should be provided with social freedoms”.

The conference held with financial support of NED.