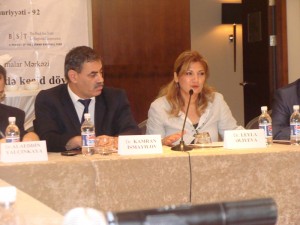 On September 25, 2010 CNIS concluded its 2009-2010 project with the conference on “ Transition in Azerbaijan and Turkey: History and Current Challenges” in Baku.
In the course of year Turkish and Azerbaijani experts traveled all over Azerbaijan hosting seminars addressing democratic standards, the rule of law, state and nation-building experiences, civil society, political pluralism and other significant topics.
Kicked off by Leila Alieva’s opening speech, the president of the Center for National and International Studies (CNIS), experts discussed nation and state building processes both in Turkey and Azerbaijan and urged both states to learn from each other’s long history of statehood.
“It is not the European institutions or the West that play a key role for the ex-Soviet states in integrating and adopting liberal values and democracy, but the neighbours of those states”, said political analyst Leyla Aliyeva. “In contrast with the Baltic states which readily joined the democratic camp thanks to the support of the nearby European states, Azerbaijan in this respect cannot boast with any such support except Turkey’s. We could not overestimate Turkey’s influence on the formation of our state”, she believes.

Undoubtedly, L.Aliyeva adds, both countries share similarities which have led them down the path of liberal values. These similarities, however, are based not on common linguistic, cultural or religious heritage, but on the political processes which took place at the turn of the twentieth century.

In drawing parallels between Turkey and Azerbaijan in the period of transition, Nasiman Yagublu, a well-known historian, notes, on the other hand, that in spite of the commonplace use of the phrase “one nation – two states”, there are still differences between the two countries and unresolved problems which are an obstacle in mutual and European integration. Unfortunately, he stressed, not enough research has been done with regard to the Azerbaijani–Turkish state model and in defining the essence of this type of integration.

At one point, it was Mammad Amin Rasulzadeh who brought in the idea of merging Western and Eastern values. “By that time, Azerbaijan had clearly fallen behind its neighbours in terms of modernising the state. While the first newspaper in Georgian was published in 1811, the first newspaper in Azeri was not published until 1875. At the end of the nineteenth century, there were both Georgian and Armenian independent political parties, whereas the Azeri Musavat Party was established only in 1911. It was in this period in particular, when the Democratic Republic of Azerbaijan was founded, that the country saw the rise of liberalism: political parties and movements being formed; sociopolitical institutions being established, women’s rights being expanded, etc.”, said N.Yagublu.

According to Milli Majlis member Nasib Nasibli, instead of idealising the historical past it would be much more reasonable to think about the problem of nation and state. “How could we build a state, if we do not even know who we are? Some call themselves Azeri and are proud of that, some consider themselves Turks. If my grandfather called himself a Turk, and I call myself Azeri today, does that mean that we have switched nations?”, argues the MP.

Türker Taşansu, a professor from Ankara University, shared his opinion next. In his view, the more developed the legal system of a country is, the more successful is its development in accordance with the modern democratic state model. “Stagnation and artificially created political stability are essentially the enemies of the legal system development, as the latter requires constant modernisation”, noted the Turkish legal analyst.