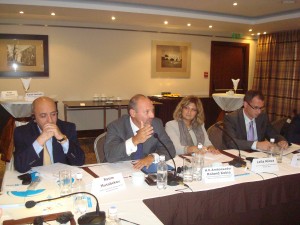 The EU policy in the region from the Mediterranean to the Baltic, from the Caspian to the Black Sea and the realities of the region was the topic of the workshop on “The EU approach towards the Caspian: soft power or realpolitik?”, held by the Center for National and International Studies at the Hyatt Regency on September 7, 2011. The objectives of the conference were to consider the EU’s role within the Caspian region and get local feedback from those living and working in the region as to the state of play of subregional cooperation in Europe’s outermost Sea. Local stakeholders and representatives were invited to find out more about the work of EU4Seas and to discuss the challenges facing the region, whilst looking for common solutions to these issues.
The participants present the results of eight research centers, carried out in the last three years. The researches were related to security and energy issues, visa requirements, and the state of democracy and human rights, said the head of the Center for National and International Studies, Dr. Leila Aliyeva.
Jordi Vaquer, the EU4Seas Project Co-ordinator (CIDOB, Barcelona/Spain) believes the Caspian Basin is extremely important for Europe. Unlike the Baltic, Mediterranean and Black Sea regions, the Caspian states are not EU members. Nevertheless, the experts examined the prospects of the European Union’s coming to the region.
In particular, in strengthening democracy in 2008 the region faced with opposition from the military. This was the result of the Georgian-Russian war.
In the Caspian Sea Basin there are two approaches to democracy: the first is the development of sovereign democracy, while the second one is development under the influence of democracies in other countries. The choice depends on the internal problems or geopolitical situation.
Carmen Claudin, a Research Director of CIDOB, stressed that recent developments in the world, mainly “the Arab Spring” will bring changes in the situation.
Nasib Nasibli, Professor from Baku State University of Languages believes that in the Caspian Basin the European Union is primarily concerned with energy issues and global security. Thus, 25% of the Afghan drug traffic goes to Europe via Azerbaijan, he said.
However, among the countries of the region there was no unity historically, and is unlikely to be in the future. Azerbaijan, Russia, Kazakhstan, Turkmenistan and Iran are oil-extracting countries and fight for markets, and 90% of their budget depends on oil and gas. The recent rises in energy prices only increased the ruling regimes in those countries. These states’ geopolitical orientation differs. In addition, unresolved local conflicts still remain in the region, said Nasibli.
Sohbet Karbuz, Director of Hydrocarbons, Mediterranean Energy Observatory (Paris, France) in his speech stressed that in the coming years, 85% of the gas consumed in Europe will be imported. “Therefore, the EU is interested in diversifying sources of energy. Very soon, the export of gas from Algeria and Norway will be reduced and its dependence on Russia will increase. An alternative source for Europe is the Caspian region”, said Sohbet Karbuz.
Rasim Musabeyov, Political Scientist, Member of the Milli Majlis, expressed an opinion that the EU should not leave the implementation of the Trans-Caspian gas pipeline with Azerbaijan and Turkmenistan. Brussels should give them political support and include this issue in its relations with Russia.
Head of EU Delegation to Azerbaijan, Ambassador Roland Kobia said that the EU policy in the Caspian region, as in other parts of the world, is based on values. According to him, the EU does not want to impose anything on other countries, but acts through dialogue and convincing.

For more information about the project, please visit the EU4SEAS website http://www.eu4seas.eu/index.php?option=com_content&task=view&id=282&Itemid=20