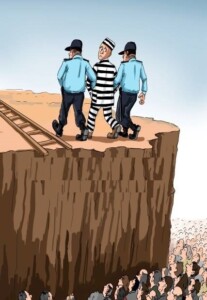 “Moscow can make Baku submit to its will by threatening to create internal destabilization in Azerbaijan.”

Niyamaddin Ahmadov, the former bodyguard of Ali Karimli, chairperson of the Popular Front Party, who was convicted and sentenced to 13 years in prison, was tortured in prison. Ahmadov’s family told that he was severely beaten by the prison guards. Ahmadov was subjected to severe torture previously during the investigation. Chairperson of APFP Ali Karimli said that those who ordered the torture and executors should be held accountable before the law. Karimli demanded the Azerbaijani authorities stop the torture in the penitentiary service immediately.

Javad Gafarov, a resident of Potu village in Goychay, told Meydan TV that a police officer threatened him to give a bribe. Gafarov said: “Police detective Parviz Israfilov approached the KPZ (temporary detention center) and threatened me and my friends that if we did not collect five thousand manats and give it to the head of the Investigation Department, Azar, they would send us to Baku – “Bandotdel” (detention under strict regime). We had to find money to save our lives, and as a result, we agreed on two thousand manats. The same police officer who had threatened us withdrew two thousand manats from his card to pay to Azar on our behalf. We returned the money to him after we had left the police station.”

Exiled journalist Ganimat Zahid said that civil society activists in Azerbaijan have a very serious task to learn the truth about the new joint cyber security project between Israel and Azerbaijan. Zahid wrote: “The civil society representatives should appeal to the Israeli government through the Israeli media and ask for an answer. Demand an answer why Israel has started a cyber security project with the government of Azerbaijan. We have the right to learn. It should be required, taking into account the previous experience of projects like Pegasus. We need to know if this joint project of Israel with the Azerbaijani regime will create cyber terror platforms against civil society.”

A soldier serving in the Baku garrison, resident of Jalilabad region, Agamaliyev Nurlan Elshan oghlu died as a result of a work-related accident. The information was confirmed by the Ministry of Defense. Three days ago, another soldier Fazil Mammadov died due to work-related negligence in Nakhchivan.

Asif Yusifli, a member of the APFP, reported that he had a telephone conversation with Sahin Haji, a member of the party who was arrested on trumped-up charges. Haji said that the doctors of the drug dispensary submitted a false report about him to the court twice. According to those reviews, allegedly, Haji is a drug addict and needs treatment. The Ganja police commented on the case of Haji, stating that Haji and his close friends are drug abusers. Haji denied the allegations calling them “completely false”. Before being arrested Haji was working as a chess teacher and was an active member of APFP. According to Shahin, in the prison where he serves his term, 33 prisoners are placed in a cell with only 16 beds. “The prisoners take turns sleeping due to lack of bed which is torturous”, said Haji.

“Defense Line”, a movement by lawyers, shared a statement saying that in the last few months, Ali Aliyev, Chairman of Citizen and Progress Party, was imprisoned three times, and another employee of KIM TV, lawyer Ilham Aslanoglu, who conducted a public investigation on the “Tartar Case”, was imprisoned twice. “Defense Line” called for “ending the deepened repression policy, including the harassment and pressure against journalist Abid Gafarov, the release of the prisoners of conscience Ali Aliyev and Ilham Aslanoglu, and the decriminalization of norms that generally provide for criminal liability for slander and insult, speech, opinion.”

Political analyst Arastun Orujlu commented on the Ashgabat Summit of the leaders of Caspian littoral states, arguing that “Moscow can make Baku submit to its will by threatening to create internal destabilization in Azerbaijan.” Orujlu wrote: “After the summit in Ashgabat Azerbaijan made two important decisions: The land border with Turkey, which was the only open land border, was closed; And In media closely connected to the government, the negative notes towards Russia were suddenly replaced by positive messages. Moscow will have to take one of two steps in its Azerbaijan policy: to replace the regime in Baku with another that is completely loyal to it, or to intervene militarily in Azerbaijan. It is known that the second option would not only lead to a harsh international reaction but can also negatively affect the already fragile position of Russia in Ukraine. In addition, military intervention in the South Caucasus may involve Moscow in an open conflict, at least with Turkey, but also with NATO. This would mean a disaster for Russia. Therefore, Moscow can make official Baku submit to its will by threatening to create internal destabilization in Azerbaijan, and if this is not possible, it can change the government. But the power of Moscow’s 5th column in Azerbaijan may not be enough for this, in which case the scheme implemented in Almaty in January may be needed.”

Turkey and Armenia agreed to open their border as soon as possible for citizens of third countries visiting the two countries to cross and decided to start the necessary process in this regard. This was stated in the statement of the Ministry of Foreign Affairs of Turkey after the fourth meeting held in Vienna between the special representatives of the Normalization Process between Turkey and Armenia, Ambassador Serdar Kılıç, and Deputy Speaker of the Armenian Parliament Ruben Rubinyan. It was noted that they also agreed to start direct air cargo trade between Turkey and Armenia as soon as possible and decided to start the necessary process for this purpose. Meanwhile, Azerbaijan has closed its land borders with Turkey. The pandemic was cited as the reason by the government officials. Currently, Azerbaijan has closed land borders with all its neighbors, and entry into the country is possible only by air travel.

Chairperson of ADWP Gubad Ibadoghlu said that although “in other countries, Formula 1 Grand Prix races pay to the budget, while in Azerbaijan Formula 1 receives funds from the budget.” Ibadoghlu wrote: “From the state budget of 2021, funds in the amount of 97.9 million manats were spent on international, national, and other similar events. Some people argued that Formula 1 would bring income to Azerbaijan, but in 2021, 80 million manats were spent in connection with hosting the Formula 1 Grand Prix races and the group games of the European Football Championship in Baku. The Ministry of Finance, for some reason, combined the budget of these two events.”

Minister of Labor and Social Policy Sahil Babayev said during his speech in the parliament that work is underway to increase the allowance of 80 manats given to war veterans, and it will be considered within the framework of social reforms. Chairperson of ADWP Gubad Ibadoghlu reacted to Babayev’s statement by saying that “the pensions of the veterans should have been increased since the beginning of the year.” Ibadoghlu wrote: “Although we have raised the issue many times, the problem has not been resolved due to the hostile attitude of the political authorities towards the war veterans. I believe that it is possible to implement this from July 1 within the social protection and security expenses of the increased 2022 budget. Therefore, the issue should be resolved as soon as possible, and the allowance of 80 manats given to war veterans should be increased at least twice, and at best it should be brought to the cost of living minimum – 210 manats.”

Political commentator Arastun Orujlu said that although the government has heavily invested in the construction of airports and hotels in the liberated territories, it has no plan of returning the IDPs to their homelands. Orujlu wrote: “Within the framework of the “construction works” carried out in the territories of Karabakh that were freed from occupation a year and eight months ago, roads, airports, hotels, catering, and other business facilities are being built. In addition, the information provided from those areas says that planting works are carried out. However, according to one of the experts working in the area, mass relocation of people is not expected for at least the next two years. This seems very likely because those who have to return to those areas can mainly work in agriculture. However, the land, as I said, has already been distributed among 2-3 oligarchs. It is also interesting that no steps are taken towards the return of the legal inhabitants to the liberated lands and the recognition of their land ownership rights. Especially in villages and towns with natural conditions favorable for tourism and entertainment facilities.”

The expulsion of the singer Afshin Azeri, an ethnic Azeri of Iran, from the tv show by the host Zaur Kamal caused a furious reaction on social media. Ilham Huseyn, the columnist of Azadliq newspaper, reacted to the incident by saying that “the government has long expelled its citizens from their own country.” Huseyn wrote:  “For a moment, I thought of us, and I remembered the beginning of our tragedy. They expelled us as a people from the country. They have kicked us out in a ruder, more disrespectful way. First, they expelled the election from the country, then the independent judiciary, then the transparent administration, then the free press, then quality education, then quality health care, etc. In short, if we had protested when the government decided to expel us from the country, now when we turn on the TV, we would not see such low-level people. Television would serve to educate. We would not see the Zaurs who not only insult the singers on the screen but the whole nation. As the country is governed, so is its TV. Authoritarianism is interested in distributing cheap TV shows, not values. That is, Zaur is the outcome of the policies of this government.”