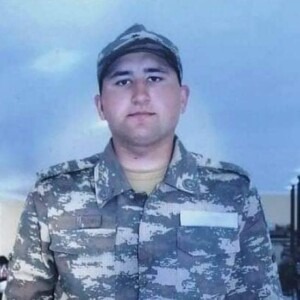 “As long as the Russian “peacekeeping” forces are in the region, the will be no prospect of peace.”

Elchin Adalat oghlu Pashayev, a veteran who complained about Asif Aghayev, the executive head of Beylagan district, attempted suicide by cutting his veins. Veteran says that even though many times he requested to have a meeting with Aghayev, none of his requests was considered.

Writer Zumrud Yaghmur protested in front of the Presidential Administration to demand a fair investigation of a rape case. Yagmur’s daughter Sanay Yaghmur was raped in 2020 when she was 17 years old. “By defending the rapist in this criminal case, the authorities take revenge on Zumrud Yagmur for her political views and put pressure on her”, said the activist Nigar Hezi. Nigar Hezi noted that “there are perhaps a handful of mothers in this country who are demanding the rights of their raped daughter and trying to punish the criminal by law, and there is almost no one who does it publicly.” Zumrud Yaghmur told the reporters that she would find peace “only if the criminal who molested her child received the deserved punishment.”

Following the death of Kazimov, the Ministry of Defense of Azerbaijan conducted an anti-terrorist operation “Revenge,” against the Armenian armed forces. The Ministry issued a statement regarding the military operations in Karabakh and accused the Armenian side of the tension. The statement read: “On August 3, a terrorist act of sabotage was committed against the units of the Azerbaijani army. As a result of terrorist provocation, a military serviceman of the Azerbaijan army – soldier Kazimov Anar Rustam oghlu was martyred. In addition, illegal Armenian armed groups tried to seize the Girkhgiz hill located in the mountain range covering the territory of Kalbajar and Lachin regions and to establish new combat positions there.” In the statement, the retaliatory measures of the Azerbaijani army were called the “Revenge” operation: “As a result of the “Revenge” retaliatory operation carried out by the units of the Azerbaijani army, the Girkhrgiz height, as well as Saribaba and a number of other important commanding heights along the Lesser Caucasus mountain range were taken under control. At present, engineering works are being carried out on the building of new positions and construction of supply roads.”

Commenting on the escalating tensions in the Karabakh Region, chairperson of APFP Ali Karimli said that as long as the Russian peacekeeping forces are in the region, the will be no prospect of peace. Karimli wrote: “As a nation we should demand the withdrawal of Russian “peacekeepers” from Karabakh. Our soldier Kazimov Anar was martyred as a result of the fire opened by the Armenian armed forces illegally stationed in the territory of Karabakh. May God have mercy on our martyr, and give patience to his family and relatives. The Russian “peacekeepers” stationed in the area did not ensure that the murderers of our martyred soldiers were arrested and brought to justice.”

Chairperson of ADWP Gubad Ibadoglu said that “contrary to what Ilham Aliyev claims, the Karabakh conflict is not over, and the Armenian armed forces have not accepted the “capitulation.” Ibadoghlu wrote:  “The junta regime of the Armenian separatists is still in Karabakh. The long-term stay of Armenian armed groups and the Russian “peacekeepers” who defend them in the territory of Azerbaijan, the frequent violation of the ceasefire, and the fact that our servicemen are killed frequently are absolutely not in accordance with the national interests of Azerbaijan and are not a solution to the Karabakh problem. In order to break the vicious circle and achieve lasting peace in the region, the leadership of Azerbaijan and Armenia should intensify bilateral peace talks mediated by the EU and Georgia. Only in this case will it be possible to break the Russian scenarios related to the region and make the Russian “peacekeepers” leave Karabakh.” Ibadoghlu also said that Aliyev signed a declaration to end the war with the dictation of Putin and without consulting with the public. “I looked further at this document and came to the conclusion that all the troubles that befell us stem from this document that doesn’t serve the interests of our nation”, said Ibadoghlu.

Chairperson of Musavat party Arif Hajili the Russian peacekeeping forces in the Karabakh region prevent the possibility of peace in the region. Hajili wrote: “For nearly two years, the territory of Upper Karabakh has been under the control of Russian troops stationed here under the name of “peacekeeping forces”. These military formations actually serve not to promote peace but to prevent the possibility of peace. It protects the Armenian armed forces there and carries out the resettlement of the population that has never lived there. “Peacekeeping forces” not only do not allow tens of thousands of Azerbaijanis who lived in the towns and villages in that area to be relocated there but also don’t permit the entrance of the representatives of the Azerbaijani state leadership, the Turkish-Russian joint observation mission, and the Azerbaijani journalists. It is clear to everyone that there will be no peace until the Russian troops leave the territory of Azerbaijan.”

Exiled activist Tural Sadigli said that the goal of the military operations in the Karabakh region is to cement Aliyev’s regime. Sadigli wrote: “I condemn Ilham Aliyev‘s new plot called “Revenge”. It is not an anti-terrorist operation but the continuation of the same evil policy as before. I condemn the opposition members, media representatives, and anyone who supports it or makes statements justifying it in their writings. They claim that our soldiers were killed, and our army took revenge by conducting an anti-terrorist operation. Unfortunately, some members of the opposition circulate this lie by sharing posts that call for another war. The Azerbaijani authorities themselves have been spreading the news that they would start a war. A leader who is a thief would not make an honest Commander-in-Chief, as his intentions are evil. Those that died in the war are not the children of Ilham Aliyev nor of those around him. They were 18-year-old young people from ordinary families.”