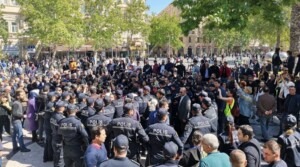 “The proposed Law on Political Parties serves to dismantle the legal framework of the political system.”

The Baku Court of Appeal returned the appeal of the Surakhani District Court regarding the denial of conditional release of human rights defender Elchin Mammad. The NGO “Legal Education of Sumgayit Youth,” headed by Mammad, shared a statement regarding the decision of the court. Mammad regards this as a violation of his right to appeal to the court. Although Mammad had no previous disciplinary action, in the first instance court refused to reduce his sentence after serving 1/3 of his sentence. Elchin Mammad, head of the NGO “Legal Education of Sumgayit Youth” and editor of the “Yukselis Namina” website, was arrested in March 2020. On October 17 of the same year, the Sumgayit city court found him guilty of “theft” and “illegal possession of ammunition and weapons” and sentenced him to four years in prison. International Amnesty International, PEN, FIACAT, and other organizations condemned the arrest of Mohammad. Local human rights activists recognized him as a political prisoner.

Chairperson of APFP Ali Karimli commented on the recent politically motivated arrests saying that “the job of law enforcement agencies is not to slander and arrest opposition and honest people, to put false accusations against them, but to investigate the looted wealth of the country, to bring those who plundered the nation’s property and wealth to justice.” Karimli also added that law enforcement agencies should take measures against the officials who brought the veterans to the point of suicide and must punish criminals, monopolists, and corrupt officials.

Nazir Hasanov, a Karabakh veteran from the Ujar region, who set himself on fire protesting the Ministry of Labor and Social Security’s decision to suspend his benefits, died in the hospital. According to the unofficial statistics, at least forty veterans died as a result of suicide.

APFP activist Gulnara Rahimova was sentenced to 460 hours of correctional labor on the charge of slandering and insulting the police. Rahimova exposed a police officer who used violence against a rally participant.

Milli Majlis is planning to adopt a new law on political parties. According to the new draft law, political parties are required to have at least ten thousand members in order to get officially registered. Moreover, the party must be founded by at least 200 citizens who have been continuously living in the country for the last 20 years. In addition to that, party registration would be canceled if it does not participate in at least two elections in a row. The draft law also brings requirements for the party chairpersons. According to the new law, the chairperson and deputies must be elected from members who have been living permanently in the country for the last 20 years. Many criticized the new law saying that with these new restrictions, Aliyev took a new tactical step to destroy the real political rivals in the country. Chairperson of APFP Ali Karimli said that the proposed Law on Political Parties serves to dismantle the legal framework of the political system. Karimli wrote: “The goal of this law is to limit the possibilities of the political activities of the real opposition, prevent it from making independent decisions and keep it outside the political system. In this regard, the necessity of the emergence of the law is to deprive the APFP, which has become the main alternative in the current political system, of the right and opportunities to participate in political life. Until now, the government tried to prevent the APFP through political repressions and bans, but now it is preparing to declare it outlawed as a whole.”

Chairperson of ADWP Gubad Ibadoghlu said that the regime is afraid of real opposition and, therefore, by imposing new laws, it aims to sideline all potential political parties. Ibadoghlu wrote: “It seems that the leadership is afraid of the ADW Party, considers it a threat to itself, changes the existing Law on “Political Parties” in order not to register the Party and ban its activities which is a total violation of the Constitution.”

Member of APFP Fuad Gahramanli said that the proposed Law on Political Parties serves to destroy the legal framework of the current political system. “The main goal of this law is to limit the possibilities for political activities and prevent the real opposition from active political presence”, added Gahramanli.

Economy and cost of living crisis

More than 1,200 Wolt couriers have been boycotting the company for several days already. The app of the company informed the customers about the restrictions and affected restaurants and shops.  Member of NCDF Tofig Yagublu supported the couriers on social media and said that “the public we must support the rightful and courageous strike action of the couriers working at Wolt.” Yabuglu’s Facebook post reads: “The company exploits people greedily and mercilessly. The couriers’ demands must be met. On the other hand, this action is a very good example, let the workers in other fields follow suit. There is terrible and degrading exploitation in most fields.”

Chairperson of the Musavat party, Arif Hajili, criticized the government for the failed economic policy, saying that despite rising oil prices, inflation escalated. Hajili wrote: “Ilham Aliyev says that our incomes have increased by 20% in the last six months. We also say that the energy crisis caused by the Russia-Ukraine war does not affect the economy of Azerbaijan. On the contrary, the rise in the price of oil and gas increases the incomes of Azerbaijan. But how did it happen that Azerbaijan, whose income increased by 20%, entered an economic crisis? Why did the income of the population not increase? Salaries, pensions, and social benefits did not increase. On the contrary, the price of flour, bread, oil, meat, dairy products, and other daily necessities increased. How come the population of the state with increasing income got poorer instead of getting richer? Probably, only Ilham Aliyev, who always knows everything better than anyone, can answer these questions, which have neither mathematical nor logical answers.”

During the second Karabakh War, at the age of 18, Guliyev Sahin, who lived in Salyan, took part in heavy battles in Fizuli and Shusha. On November 7, 2020, as a result of the explosion of a grenade shell in Shusha, he survived despite being seriously injured. He was awarded six medals for his personal bravery in battles. However, Guliyev’s disability status is not recognized, which left him unable to receive veteran benefits. Due to his health issues, Guliyev can not find a suitable job and his family, who suffers from financial challenges, is not able to support him. Guliyev said that he wanted to commit suicide.

“Azerishig,” the main electricity provider, cut off the lights in the Huseynhajili village of Masalli. One of the families in the village lit a candle, which resulted in tragedy. The candle soon caused a fire at the house, killing a 38-year-old mother, and her two sons, aged 10 and 12, were burned to death. Two family members were severely injured and hospitalized.