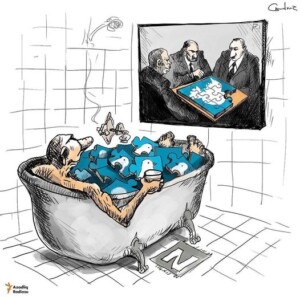 “It is a terrible injustice that thousands of veterans live in poverty and the first family increase their businesses...”

Shahbaz Guliyev, who was in Armenian captivity for seven years, protested in front of the Presidential Administration, demanding a pension for serving in the army and disability. When he tried to set himself on fire, police officers stopped him and took him to a different location.

Azadliq newspaper reports that the term of administrative detention is increased from three months to four months. This provision was reflected in the proposed amendment to the Code of Administrative Offenses, which was discussed at the meeting of the Legal Policy and State Building Committee of the Milli Majlis.

“Armenia and Azerbaijan recognize each other’s territorial integrity and sovereignty. Both countries reaffirmed their commitment to the United Nations (UN) Charter and the 1991 Alma Ata Declaration, which recognizes each other’s territorial integrity and sovereignty. They agree that this will be the basis for the work of border delimitation commissions.” This is from the statement of the Elysee Palace on the results of the quadrilateral meeting of the leaders of Azerbaijan, Armenia, France, and the European Union (EU) held on October 6. President of Azerbaijan Ilham Aliyev and Prime Minister of Armenia Nikol Pashinyan met on October 6 in Prague at the invitation of the President of France and the Chairman of the Council of the European Union on the borders of the European Political Union. Azerbaijan-Armenia relations and border delimitation issues were discussed at the meeting. The next meeting of border commissions is expected to be held in Brussels at the end of October.

President Aliyev, who participated in the summit of the European Political Union in Prague, while answering the questions of journalists from Azerbaijan, said that the peace agreement could be signed soon and the Armenians living in the Karabakh region will be given the same rights as Azerbaijanis. “If Armenia is willing, the peace agreement can be signed by the end of the year. I think that if a decision is made soon, the working groups of the two countries will start working on the text of the peace agreement, and we can reach an agreement by the end of the year. If anyone (Armenians) thinks that they need to live as citizens of Azerbaijan, in my opinion, they will not regret it. But if for some reason this is not suitable for someone, they can choose another place of residence for themselves.

Member of NCDF Tofig Yagublu reacted to the president’s comments on the rights of Azerbaijanis, saying that it could only be sarcasm. Yagublu wrote: “Ilham Aliyev said that if the Karabakh Armenians accept Azerbaijani citizenship and its Constitution, they will be given the rights that Azerbaijanis have. He will transfer the money allocated for them from the budget to offshore, cancel their rights to choose and to be elected, their right to free assembly, crush them through power structures and courts, slander critics of the government and put them in prison, beat them, torture them, and kill them. Seriously, that’s what he said. Don’t you believe it? Believe me, that’s what he meant. If you are in doubt, I quote his answer as it is: “Armenians will have the same rights as the citizens of Azerbaijan.”

Member of APFP Fuad Gahramanli argued that by attending a joint meeting hosted by the EU, both Armenia and Azerbaijan approach more to the path of European integration. Gahramanli wrote: “The Caucasus region is drifting a little more every day towards (European) integration, and as it drifts, the need to adjust the domestic situation according to the European values increases. Azerbaijan’s integration into the European Political Union is announcing that a new stage is about to begin. At this stage, it is necessary to go without compromise with the people and the opposition, and it is necessary to respond to new policies, new approaches, and new challenges. This issue is not the choice of Ilham Aliyev but the choice made by the West on his behalf. At this new stage, Ilham Aliyev knows that after Pashinyan, it will be Ali Karimli’s turn to sit at the same table with him.”

Reconstruction in Karabakh under the shadow of Corruption

Last week President Aliyev and his wife, vice president Mehriban Aliyeva attended the groundbreaking ceremony of a hotel in Aghdam, Karabakh region. However, independent journalists and the opposition believe that all the companies that are involved in the reconstruction work in the Karabakh region are decided by non-transparent business deals, and many of those companies belong to the ruling family of Azerbaijan.  Chairperson of ADWP Gubad Ibadoghlu shared a list of companies that have gotten government contracts all belonging to Pasha Holding, which is known to be owned by the first lady’s family. Ibadoghlu wrote: “A few days ago, Ilham Aliyev laid the foundation of the City Hotel Agdam in Agdam city. The hotel will be built by the “PMD Projects” company. “PMD Projects” company is part of “PMD Group” LLC, which operates in agriculture, industry, construction, real estate, banking, and other fields. “PMD Group” LLC is the second largest group of companies within “Pasha Holding” which belongs to the president’s family. Currently, “PMD Group” LLC is the owner and manager of 20 hotels belonging to “Pasha Holding”. On the same day, Ilham Aliyev laid the foundation of the Equestrian Breeding Center in Eyvazkhanbeyli village of Agdam region. The concept of the center was developed by the “Reflect Architects” company. This company, which does not even have a website, is also owned by the family. The restoration of the Eastern Bazaar, which was taken over by Pasha Holding, was the recent project of this company.” “There is no state in Azerbaijan, the country has become a family business, and a group serves the family, in return, they receive rights and favors, they are flattered, and the majority of the population is struggling for survival”, added Ibadoglu.

Chairperson of APFP Ali Karimli, referring to the research shared by Ibadoghlu, said that it is a “terrible injustice” that thousands of veterans live in poverty and the first family increase their businesses. Karimli wrote: “Did the brave sons of Azerbaijan sacrifice their lives so that Aliyev could grow his family business in Karabakh? Or does Ilham Aliyev really consider our liberated lands his personal property? This is the true face of Ilham Aliyev‘s “Restore Karabakh” policy. IDPs, who are the real owners of the Karabakh lands, still live in longing for their homeland, 45 Karabakh veterans committed suicide, thousands of our other heroic veterans, families of martyrs, and nearly 100,000 war veterans are disappointed and struggling, and the ruling family is busy increasing their billions. Our people are still silent about this terrible injustice.”

Member of NCDF Tofig Yagublu said that Aliyev attended the groundbreaking ceremony of the hotel not as head of state but as a businessman. Yagublu wrote: “bridges, roads, schools, hospitals, are built at the expense of the state budget, and its foundation should be laid by the person representing the state. The hotel, on the other hand, belongs to the private sector, and representatives of that company and the contractor can participate in the groundbreaking ceremony. After researching (it was already known without any investigation) that both the client and the contractor of this hotel belong to the family-owned “Pasha Holding”, it turns out that the couple participated in the groundbreaking ceremony not as government officials but as representatives of private business. But, do you know what it is like to build a hotel in the city of Aghdam, which is still in ruins and not a single family has been relocated? To be honest, I myself could not think of anything similar to this level of stupidity and absurdity.”