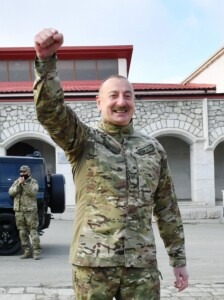 “The Russian army fleeing from Kherson cannot and should not keep Karabakh under occupation. The withdrawal of the occupying army from Karabakh should become a national demand.”

Activist Mamiyev reports that the political prisoner Lachin Valiyev, who was detained in penal institution number six, was transferred to an isolation cell. According to Mamiyev, Valiyev was insulted and then involved in an argument with another prisoner, after which Valiyev was sent to the isolation cell for punishment and kept there for 26 days. Later, he was taken to prison number ten.

The second anniversary of the “November Declaration”

November 10 marks the second anniversary of the declaration that was signed between the leaders of Armenia, Azerbaijan, and Russia after a bloody war between the two Caucasus countries in the fall of 2020. In his speech in Shusha, president Ilham Aliyev said that the Azerbaijani side fulfilled the obligations it took but would take necessary steps if Armenia continues to ignore its responsibilities. “We are fulfilling all the obligations we took on in the November 10, 2020 Declaration, we have been fulfilling them for two years, but is Armenia fulfilling them? No! What are the Armenian armed forces doing in Karabakh? Our patience is not endless, and we are warning again: if this obligation is not fulfilled, Azerbaijan will take necessary steps.”

According to the tripartite ceasefire agreement adopted on November 10, 2020, Russian peacekeepers have been deployed in the Nagorno-Karabakh region of Azerbaijan for a period of five years.

Moreover, in his speech in Shusha, the Azerbaijani president also attacked the opposition party APFP and called the APF-Musavat government of the early 1990s “treacherous” and “anti-national elements”.

Chairperson of APFP Ali Karimli reacted to the president’s comments saying that inviting the Russian troops into Azerbaijan was a grave political mistake. Karimli’s Facebook post reads: “Unlike two years ago, the majority of our people now know that Ilham Aliyev hastily signed the tripartite agreement, returned the Russian army to Karabakh, and then signed a document of alliance with Putin on the night of November 10, which were serious political mistakes. The Russian army fleeing from Kherson cannot and should not keep Karabakh under occupation. The withdrawal of the occupying army from Karabakh should become a national demand.”

Member of NCDF Tofig Yagublu reflected on the November Declaration accusing the government of not being transparent to the public regarding the details of the document. Yagublu wrote: “On November 10, 2020, Ilham Aliyev said that Armenia had capitulated. Capitulation by one of the warring parties means that it lays down its arms, raises its hands, and accepts all the terms of the victorious side. How is it that the capitulated side gets a five km wide corridor to communicate with the armed separatists, but the victorious side does not get a single path to a part of its legitimate territory? And then, after a long time has passed on that agreement, you make nonsense arguments about Zangezur. How ridiculous. But, don’t blame him- “the victor”. He would not give the Lachin corridor to the Armenians, and he would rather add Zangezur and Goycha districts to the territory of Azerbaijan, but the APF-Musavat government did not allow it…”

Exiled journalist Afgan Mukhtarli called November 10 “National Treason Day”. Mukhtarli wrote: “3,500 martyrs, thousands of young people who lost health, more than 40 veterans committed suicide, more than 80 soldiers killed in one night after the ceasefire, an unfinished conflict and a false celebration of the iron fist. I ask God for mercy for our martyrs, healing, and patience for our veteran brothers. Tomorrow is National Treason Day, when a part of the country was gifted to Russia.”

Political commentator Shahin Jafarli said that without guaranteeing human rights and freedoms, Victory Day would not solve the issues of the country. Jafarli wrote: “The problem is that after the war, as this topic continues to dominate the country’s agenda, and other national issues are hardly discussed. Democratic development, guaranteeing human rights and freedoms, economic progress, and solving deep-rooted problems in education, health care, and other areas have been pushed into the background. The tragicomic paradox of “a victorious but disenfranchised people” should be eliminated. How come these victorious people are deprived of choosing their own municipality? Nothing unusual is required to put an end to this ugliness – the relevant provisions of the Constitution of Azerbaijan must be fulfilled.”

Congratulating his followers on Victory Day, member of the REAL Party Natig Jafarli argued that Azerbaijan’s neighbors on its northern and southern borders would not tolerate seeing it as a strong state. Jafarli wrote: “The threat to Azerbaijan from the North and the South has the same reason – both sides cannot accept the fact that Azerbaijan, an independent state, has been standing strong for more than 30 years. But even though independence and sovereignty are sacred, they are not enough, and the next step is to build a strong welfare state. A strong state is built not on law enforcement agencies but on strong citizens, a competitive economy, a fair court, and science-intensive education. Victory Day – the liberation of a large part of the land from occupation created great opportunities to achieve these goals! Realization of these goals goes through systematic changes.”

Journalist Afgan Mukhtarli reported that president Aliyev’s daughter Leyla Aliyeva’s poems were staged in the theater in Georgia with the help of state funding. Mukhtarli wrote: “Today, a performance based on Leyla Aliyeva’s poems was performed at the Rustaveli Theater in Georgia. In 2020, Leyla’s poems were translated into Georgian and published in a book. In June of this year, a play was prepared based on those poems and won an award from the Ministry of Culture of Georgia. Ivanishvili’s government has found an old cash cow. Churches are given free gas at the expense of the Azerbaijani people, Ivanishvili and his team establishes a joint business with Ilham, and they receive millions of bribes from Aliyev to kidnap the Azerbaijani opposition. There are countless of this kind of examples. And now millions are scattered in Georgia for the publicity of Leyla Aliyeva. Undoubtedly, that play was created at the expense of the people of Azerbaijan. The performance based on the motifs of Leyla’s useless poems received an award thanks to bribes. They throw money everywhere except Azerbaijan. The money from Azerbaijan’s oil and gas goes to Europe, America, Pakistan, Turkey, and Russia. Everyone benefits from it, while the citizens of Azerbaijan are left in need.”

Activist Aziz Mamiyev called the president’s comments about the opposition hate speech and said there is no prospect of future reforms under the current regime. Mamiyev wrote: “Look at how the person who calls himself the commander-in-chief speaks hatefully in front of the army. During the war, he repeatedly made speeches with the same content. What can we learn from such a head of state? I have never seen such a head of state who constantly insults the former leaders of the country. Aliyev accuses the APF-Musavat government of robbery and looting. However, during his rule, more than 150 billion dollars of oil money was taken out of the country. The people of the country are tested with bread. We live in misery. The international press wrote about the billions transferred to offshore accounts. During Aliyev’s rule, more than 40 veterans committed suicide. Sons of this nation were killed with special cruelty in Tartar events. They broke the backbone of the army and destroyed the pride of the Azerbaijani people. Aliyev talks as if all the tragedies happened during the APF-Musavat administration, not his. With such behavior, Aliyev again proves that he will never respect international laws and norms, human rights and freedoms.”

Journalist Saadet Jahangir reports that a resident of Sarıcalı village of Jabrayil district, the mother who buried her martyr son in Jabrayil, has not been able to visit her son’s grave for two years. “The people who should visit Karabakh first are the families of martyrs and the veterans of Karabakh. There is no government body left to which she did not apply. But her dream of visiting her son’s grave has not come true so far. The last hope for the 79-year-old mother is the head of the country, president Ilham Aliyev. She called and asked me to publicize her appeal.”

The next stage of Peace Talks

The US Secretary of State Anthony Blinken held a tripartite meeting between Azerbaijani Foreign Minister Jeyhun Bayramov and Armenian Foreign Minister Ararat Mirzoyan. At the meeting held at Blair House, Blinken said, “what we are seeing now are real steps and bold steps for both countries to leave the past behind and work towards sustainable peace.” Blinken also added that as a friend of both Armenia and Azerbaijan, the United States is determined to do everything it can to support the two countries in these efforts for peace.

Commenting on the meeting of the foreign ministers, member of the APFP Fuad Gahramanli said that once again, it’s proved that the phase of parallel negotiations between Moscow and Brussels has already ended, and now the peace process is being continued only under the mediation and control of the West. Gahramanli’s Facebook post reads: “The fact that Azerbaijan’s state television has been promoting propaganda against Russia in recent days shows that Azerbaijan is finally leaving Russia’s influence and gradually turning towards the West. It is clear that this choice of the Azerbaijani leadership was forced under the pressure of geopolitical conditions, so the process is still slow. Because the Azerbaijani authorities understand that after peace is achieved with Armenia, it will not be possible for Russia to stay in the Caucasus for a long time, and at this time, the unilateral strengthening of the West in the region will inevitably make the democratic development within the country inevitable. Although this prospect is considered undesirable for the current regime, the government desperately accepts that the Putin regime has suffered such a defeat in Ukraine that it is no longer possible to take refuge in Russia and resist Western initiatives.”

The next meeting of the leaders of Azerbaijan and Armenia is expected to be held in Brussels at the end of November. It is reported that the final text of the peace document will be reviewed at this meeting.