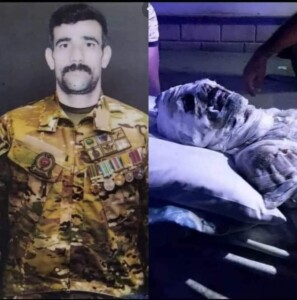 “Your silence or praising such thieves played a role in the deaths of thousands of citizens.”

One of the veterans of the First Karabakh War, Colonel Lieutenant Shahmurad Mammadov died of a heart attack while protesting the injustice of the court in Sumgait. The incident took place in the building of the execution of institutional decisions in Sumgayit. As a result of the court decision, the bank directed the monthly pension of the veteran to pay off his debt, and his card was blocked. Father of five children, Mammadov whose sole income was the pension went to Sumgayit City Executive Department because his pension card was blocked, and he died there of a heart attack. His wife Kamala Karimova told Meydan TV that when Shahmurad Mammadov went to withdraw 100 manats from his pension card a day ago, he saw that the card was blocked:

“He said that I have 100 manats left on the card, so I should go and withrow to do shopping. He went back and forth and said that my card was blocked. He receives his pension from Kapital Bank. He went and found out from the pension fund, it turned out that they blocked his credit card because of the court decision related to the loan.”

Another veteran Elvin Jafarov, a resident of Galagay village, Sabirabad region, set himself on fire in front of the executive authorities. He was admitted to city clinical hospital and his condition is serious. Regarding the incident, Elnur Jafarov, the brother of the veteran, said that Elvin was taking medicine due to the injuries he had during the war: “The price of the drug is 700 manats. His pension has been cut for almost 2 months, and as a result, he could not buy his medicine. He went and asked the executive authorities for help, but they did not do anything. That’s why he tried to commit suicide. Veteran’s brother also blamed the Ministry of Labor and Social Protection and Minister Sahil Babayev for the tragedy that happened to his brother. Jafarov said: “If my brother dies, will Sahil Babayev have the courage to look at? If there will be another war, I would go voluntarily but Sahil Babayev, will your relatives go? What should a veteran do? What is this minister looking at!?”

It is reported that Huseyn Bayramov, a soldier of the Azerbaijan Army, committed suicide. It was noted that the incident took place on July 8 at around 9 p.m. The General Prosecutor’s Office says that Huseyn Ruslan oghlu Bayramov, a soldier serving in Lachin, committed suicide by shooting himself with his own gun. Huseyn was the only child of the Bayramov family, who had no children for 11 years. This is the fourth mysterious death of a soldier in military service in the last ten days.

Karabakh war veteran Muğdat Rasul oglu Nasirov killed himself by hanging himself with a rope in the yard of his house because he could not receive a disability pension for years. Yunis Mammadov, a participant in the 1st and 2nd Karabakh wars, attempted suicide by setting himself on fire in front of the Agjabedi district police department.

After the second Karabakh war, about 50 veterans attempted suicide mainly due to financial problems and the state’s lack of support for them. The number of those who died by suicide is believed to be at least 35 people.

Commenting on the recent suicides, activist Bakhtiyar Hajiyev said that as long as the public keeps silent about the injustice in the country and unfair treatment of the veterans more people will fall victim to the regime. Hajiyev wrote: “. There are dozens of ministers and hundreds of officials who build million-dollar villas for their loved ones, while there are thousands of families who can not even afford grocery shopping. The head of the country’s properties worth 700 million dollars in London alone were revealed by investigative journalists. After this incident, if there are people who respect the thieves and bloodthirsty criminals represented in this government, share their photos, and write “my dear” on their birthdays, then they have no conscience at all. Your silence or praising such thieves has a role in the unheard stories and deaths of thousands of citizens. Their killers are also those who support this system based on thievery and stealing.”

Member of the National Council of Democratic Forces Gultakin Hajibeyli said that the reason for the suicides was the government’s failure to provide support. Hajibeyli wrote: “They committed suicide because they couldn’t stand the indifference, injustice, and negligence of the rich, wealthy state that had tens of billions of money in offshore, but left them alone with problems, unhealed wounds, hungry children, loans and rents that they couldn’t pay.”

Director of Baku Research Institute Altay Goyushov said that the reason why the situation worsened is that after the war, the regime became more authoritarian. Goyushov wrote: “It will be different after the war because the victorious, proud nation will be treated differently. Those who did not read books said so. Those who were not so ignorant and naive knew that after the war, it would be different because the authoritarian who wins the war becomes popular and gains additional power to further consolidate his authoritarian rule. It happens in those democracies that after the victorious war, people make a popular leader resign so that he does not take the credit for the victory to strengthen his power. For example, the majority of the British people did not vote for Churchill. Let me explain briefly: in democracy, the people are strong, and in authoritarianism, the leader.”

Alzamin Salayev, chairman of APFP Salyan branch, was sentenced to administrative detention for 30 days. He said that he would burn himself in front of Heydar Aliyev‘s statue if his belongings taken from him by the police were not returned.

Azadliq newspaper reports that an unknown person approached Aziz Orujov, the head of Channel 13, who was walking with his family in Sahil Park, and threatened him with death. Journalist believes that this threat is related to the activities of Channel 13, which hosts discussions about social injustice and corruption.  Moreover, writer Mirkazym Seyidov was attacked for criticizing Vasif Talibov, head of Nakhchivan AR, a relative of Ilham Aliyev.

Commenting on the recent repressions, lawyer Rufat Safarov said that the public should stand with the activists and human rights defenders before the situation gets even worse. Safarov wrote: “First of all, let’s believe that if we are indifferent to what is happening around us, one day the hammer in the hand of the judge will be hit not on the table in front of us, but on each of us. Second, let’s not allow the government to eliminate defenseless activists one by one. Thirdly, I appeal to political parties, civil society activists, human rights defenders, and society in general, that when establishing the protection of people whose rights have been violated, let’s not focus on our personal views on them but rather on their professional activities. Let’s not be silent, and sometimes ask ourselves what can we do.”

Despite growing public demand, the land borders are still closed and the only way to travel to and from the country is by air travel. Tofig Yagublu, a member of the National Council Coordination Center, announced to hold a peaceful protest on 13.07.2022 at 12:00 in front of the building of the Cabinet of Ministers with the demand “Open the country’s land borders”. Baku City Executive Power responded negatively to Yagublus’s request to hold a protest, saying that the application was not made on time (it should have been made at least five working days in advance). Upon the rejection, Yagublu changed the date of the action to 20.07.2022.

Chairperson of APFP Ali Karimli said that his party fully supports the initiative of Yagublu and invited people to join. Karimli’s statement read: “Keeping the country’s land borders closed creates additional problems for at least one million Azerbaijanis. Our compatriots who cross the border due to trade, some of their families live in neighboring countries, especially in Georgia, some want to leave the country for treatment, tourism, or education purposes, and others want to return to their homeland from foreign countries. However, they have to spend extra money from their budget to be able to highly expensive AZAL air tickets. In other words,  they have to contribute to the expansion of Ilham Aliyev‘s family business.”

In France, independent journalists revealed the properties of Sevil Aliyeva (sister of president Ilham Aliyev) worth 52 million euros. According to the L’OBS article titled “Luxury real estate: how France attracts dodgy money from around the world”, Sevil Aliyeva, the daughter of the former president and the sister of the current president, has two mansions in the famous Saint-Tropez area, two villas in Paris, and four apartments right next to the Champs-Elysées. The minimum value of the properties is estimated at around 52 million euros. Aliyeva also owns houses in The Boltons, one of the most expensive areas of London, where she says she lives, through companies registered in tax havens.