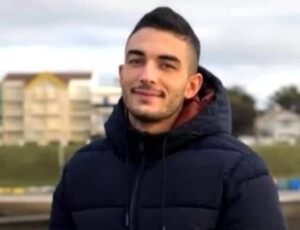 “Heydar Aliyev’s return to power is not a day of salvation for our people but a day of defeat of the republic, people’s government, republican values, and restoration of family power.”

French police have arrested two people accused of attempting to kill blogger Mahammad Mirzali. One of those arrested was an Azerbaijani citizen and the other a Moldovan of Turkish origin. Police found a machine gun, Mirzali’s photos, and instructions to his home address in their car. The Nantes court sentenced the detainees to four months in prison. One of the detainees was once arrested in Kyiv in 2018 for kidnapping. There have been two assassination attempts on Mirzali. Mirzali has been very critical of the Azerbaijani government on social media and has continuously received death threats. Exiled journalist Afgan Mukhtarli said that this is part of Aliyev’s inhumane treatment of his critics in Europe. “Bloggers in Europe are being terrorized, journalists are being abducted, political activists are being arrested, and recently six political migrants deported by the German government to Azerbaijan have been arrested on trumped-up charges,” said Mukhtarli. Reporters Without Borders issued a statement on the incident. Jeanne Cavelier, head of the department for Eastern Europe and Central Asia, said that “a hit squad was sent from abroad to target a blogger who was given political asylum in France because of his criticism of Ilham Aliyev and this case must be addressed at the highest state level”. A few weeks ago, another Azerbaijani blogger living in Europe, Tural Sadigli said that he received death threats and that he would be assassinated.

Member of NCDF Gultakin Hajibeyli wrote about the unfair treatment the members of the Popular Front Part face. Hajibeyli’s social media post read: You know the brutal attitude of the regime towards the members of the Popular Front Party. Ali Karimli is the only politician in the country who was denied a passport, the internet in his house is cut off, and even the service of his mobile phone gets interrupted after 8 pm. The members of the party are not allowed to work for jobs that would enable them to own only 300-500 manats per month. They are deprived of the basic right to support themselves and their family.”

Emil Salim, a young member of the APFP, was enlisted to serve in the army despite his health condition that was previously recognized by the Ministry as a reason to defer military service. According to the family members, after 12 years of repeatedly denouncing him as “unfit for military service,” the committee under the Ministry of Defence has forcibly brought the doctors from their houses to issue a “fit certificate.” Salim had to undergo all required examinations in a single day, and despite his congenital heart disease was sent to military service. Members of the Party said that sending a young man with a heart defect to military service is illegal and politically discriminatory and the Azerbaijani government will be responsible for any problems with Emil Bey’s health during his military service.

The chairman of the Muslim Union Movement, Taleh Bagirzade, has been on hunger strike for more than ten days. Relatives of the theologian told Meydan TV that the long-term hunger caused health problems.

A complaint has been filed against Abid Gafarov, the chairperson of the Baku Union Organization, a candidate for the 2020 snap parliamentary elections, and the mediator of KIM TV. He was charged with article 147.1 (slander) of the Criminal Code by the Khazar District Court. It is reported that the complaint was made by Karabakh veterans.  According to the court report, Gafarov insulted a group of Karabakh veterans in one of his speeches.

Exiled journalist Afgan Mukhtarli reported that Azerbaijani migrant activists held a protest in front of the German Foreign Ministry in Berlin. The activists living in Germany Alamdar Bunyatov, Emin Gurbanov, Rovshan Alahverdiyev, and Rafi Dadashov protested in front of the German Foreign Ministry to draw the attention of the German government and the international community to the hunger strike of Taleh Bagirzade and his supporters in prison in Azerbaijan, as well as the demand for the release of political prisoners.

The Kalbajar Military Prosecutor’s Office has confirmed the information that Riyad Aliyarov, a serviceman of the Defense Ministry’s military unit, died as a result of an electric shock on June 13 in the Kalbajar region. The statement of the Military Prosecutor’s Office read: “Based on the information, the employees inspected the scene and the body. Items important for the case were taken as material evidence, explanations were received, relevant expertise was appointed and other necessary actions were taken. Aliyarov Riyad Mammad oglu, born in 2003, will be buried in Khudat, Khachmaz region.

Deputy Assistant Secretary for Democracy, Human Rights, and Labor Kara McDonald is in Azerbaijan as part of her official visit to the South Caucasus. After visiting two countries in the South Caucasus – Georgia and Armenia DAS McDonald’s final stop was Baku where she had meetings with government officials as well as representatives of political parties and civil society.

Member of APFP Fuad Gahramanli said that the visit is of high importance considering that for a long time, US officials visiting Azerbaijan would not meet with the members of the opposition. Gahramanli detailed the significance and possible outcome of the visit in his social media post: “The significance of this visit is that Ms. McDonald’s impressions of our country and the information she has learned about the government’s hostile attitude to democracy will show that the United States needs to pursue a policy more adequate to the current reality. It is clear that the current behavior of the Azerbaijani government does not give rise to any positive expectations, so it is not enough for the United States to simply express its wishes. It is important to use effective mechanisms to make real changes and reforms. The significance of this visit would also be that the United States would abandon the long-standing mistake of restricting support for democratic processes in Azerbaijan to dialogue with the authorities. In this regard, as in the case of Georgia and Armenia, given the need for the success of democratic processes to depend on close cooperation with the political opposition and civil society, we can expect changes in US policy in this direction.”

Activist Bakhtiyar Hajiyev reflected on his meeting with DAS McDonald. Hajiyev’s post read: “Today, I had an hour-long meeting with Kara McDonald, US Deputy Assistant to the Secretary of State Blinken, who is visiting Azerbaijan. The meeting focused on the events in the region, the problems faced by general and individual activists, journalists, and various groups in the field of human rights. We exchanged views on the steps that the Biden administration expects to take in the future.”

Journalist Habib Muntezir reports that Azerbaijani citizen of Russian origin Alexander Borisovich Saprykin, who painted the letter “Z” on the walls of the Old City fortress as a symbol of support for Russia’s war in Ukraine, was detained in the Sabail district of Baku.

Chairperson of ADWP Gubad Ibadoghlu said that, despite the fact that they applied to the Ministry of Justice twice this year, the registration of the Party is deliberately delayed by the authorities. Ibadoghlu wrote: “While a large group of political parties went to a conference organized by the New Azerbaijan Party in Shusha, Huseyn Maliki, a member of the ADWP  Board, adviser to the party chairman, and a Karabakh war veteran, was invited to the Baku Main Police Department. Although they registered nine political parties last year, despite the fact that we applied to the Ministry of Justice twice this year, the registration of the ADR Party has been hindered and delayed as late as possible. While the government argues that the conditions are created for the activities of political parties in Azerbaijan, and the right to free association is observed this is the reality! I call for the immediate release of Hussein Malik.” The chairperson of ADWP Ibadoghlu also shared the recent statistics of the rising cost of living in Azerbaijan. Ibadoghlu wrote: “Over the past five months, Azerbaijan’s GDP increased by 7.2 percent to $ 30 billion. Oil revenues rose more than 8.5 times, while the food prices rose by 18 percent, and the budget surplus in the first four months was 2.5 billion manats. However, despite the rising oil price, the government has not raised salaries, pensions, or social benefits.”

Chairperson of APFP Ali Karimli commented on the anniversary of “Salvation Day” a day devoted to the commemoration of the former president Heydar Aliyev’s succession to power after a coup. Karimli wrote: “If there was no “salvation”, there would be no family rule in Azerbaijan for 29 years. Thousands of citizens would not live the life of political prisoners. Millions of Azerbaijanis would not be expelled from their homeland to live in exile. Millions of Azerbaijanis would not live in poverty and lawlessness in their homeland. Were it not for “salvation”, the absolute majority of the national wealth of our people would not have fallen into the hands of the ruling family and the surrounding oligarchs. Heydar Aliyev’s return to power is not a day of salvation for our people but a day of defeat of the republic, people’s government, republican values, and restoration of family power. Therefore, let this day be celebrated by the family government and the oligarchs around them, slaves who are satisfied with the way they are fed on crumbs. For millions of Azerbaijanis, today is the beginning of our national tragedy. There is no real salvation, but there will be. In the near future. The sun of truth will surely shine!”