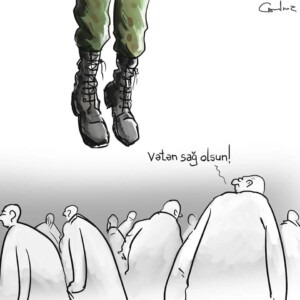 “Traitor is not the one who protests against the war; traitors are those who embezzle state funding, who plunder the country’s wealth.”

Pro-government journalists and politicians started a defamation campaign against the anti-war activists in Azerbaijan, calling them “traitors”. Last week, clashes broke out on the border between Azerbaijan and Armenia, resulting in hundreds of casualties on both sides. Many foreign politicians and organizations, as well as local activists, accused the Azerbaijani government of interfering in the territorial integrity of Armenia and called for an immediate halt to the operations. Shortly after that, Azerbaijani war opponents together with Armenian and other foreign parties, issued a petition calling for peace. As a response, pro-governmental journalists started the “Know the Traitor” campaign on social media, which was later spread by the state newspapers such as “Azerbaycan”. The participants of the campaign list the names of people who criticize the government’s territorial claim against Armenia on social media and call them traitors. Member of Parliament Ilham Mammedov targeted the activists protesting the possible new war with Armenia and accused them of treason. In his Facebook post, Mammadov called on the public to act harshly against those who objected to the war. MP’s Facebook post reads: Anti-national forces such as Ali Karimli, Altay Goyushov, Sevinj Osmangizi, Muhammad Mirzali, and Tural Sadiqli are showing everyone that they are traitors to the country by expressing various inappropriate and untrue opinions against our country. Everyone should know these traitors. They don’t want Zangezur, our ancestral home, to be returned to Azerbaijan, saying, “We don’t need Zangezur.” At the same time, they blame Azerbaijan for the military conflict that took place on the Azerbaijan-Armenia border between September 12-14 as a result of provocations by the Armenian side. This is a betrayal of our country, our people, and our state! These dishonorable scoundrels are acting on the lessons they learned from Grandma Pelosi. I believe that if Quentin Tarantino’s film “Inglourious Basterds” is remade in the 21st century, it would be these traitors who would play the role of dishonorable bastards.”

Chairperson of AG Party Tural Abbasli also joined this call of the deputy and called Zengezur (part of Armenia), the historical land of Azerbaijan. “I appeal to the citizens: Insult them on Facebook, YouTube, Tik-Tok, wherever you see them”, Abbasli wrote on social media.

Afgan Mukhtarli called the article “provocative and threatening”. Mukhtarli wrote: “In fact, this article is a warning. This is not just a warning of the next wave of repression. This post is also an official announcement that assassinations will take place. Aliyev‘s critics may be attacked by an “upset” ordinary citizen, an intolerant war participant, or a martyred brother. If this happens, the main responsibility falls on Ilham Aliyev, who does not understand his responsibility in the slightest, who uses the Azerbaijani Army as a tool under Putin’s dictates, and who puts the country in real danger. Here I declare once again. The battles that took place on the border were not to open a corridor to connect Zangezur with Nakhchivan. Our soldiers died because of Putin‘s claims in the Caucasus. The goal of Putin and Aliyev was to seize a small territory and raise the people in Armenia against Pashinyan‘s rule. They would oust Pashinyan and replace him with the Kocharyan-Sarkisyan. But everything happened the other way around. Armenia embarked on the path of separation from Russia, and Azerbaijan was called an aggressor. Ilham Aliyev is responsible for this.” Mukhtarli also reported that the “Z” symbol had been displayed on the military vehicles belonging to Azerbaijani Army. Mukhtarli wrote: “When we said that the fighting on the border started on Putin‘s order, they called us the traitor. Look at the letter Z on the vehicles of the Azerbaijan Army. Why is the letter Z, which is regarded as a fascist symbol all over the world, written on the vehicles of our army? Are we sending a message to the world that we are with Russia? Or is Ilham Aliyev conveying Putin‘s message to Pashinyan‘s government? I repeat again, Azerbaijani soldiers should not conduct a military operation on the territory of another state on the orders of Putin. Our soldiers should not die for the sake of Russia. The biggest traitor is Ilham Aliyev for dragging Azerbaijan into Russia’s slavery. The Ministry of Defence should clarify  why non-statutory signs are written on the cars.”

(Lack of ) Human Rights and Liberties

The imprisoned journalist, Avaz Zeynalli’s son, met him in the detention center. Zeynalli complained about not being given the right to contact family members by phone and the conditions of detention and said that he had health problems. Zeynalli‘s lawyer, Agil Lajic, said that he had submitted the appeal to the court to release him under house arrest.

Political Commentator Arastun Orujlu said that the new charge brought against journalist Avaz Zeynalli should be closely studied. Orujlu wrote: It is necessary to take the accusation against him under Article 312-1 of the Criminal Code (Illegal influence on the decision of an official – influence peddling) seriously. Because the accusation against Avaz Zeynalli is a test of that article. As I mentioned before, the laws and the legal system in general in Azerbaijan play the role of a tool in the hands of criminals against those who expose their actions. What happened to Avaz Zeynalli is another clear proof of this. Turning the law into a criminal instrument is proof of the state’s absence.”

A new criminal case has been opened against Ali Aliyev, the imprisoned chairman of the Citizen and Development Party (VIP). Aliyev is accused of beating and injuring another inmate in prison. The term of imprisonment of the chairman has been extended for another six months.  Aliyev was supposed to be released.

The chairman of the Democracy 1918 (D18) Movement, Ahmet Mammadli, has been detained for his social media posts. Ahmed Mammadli was suddenly attacked on the street and taken away by police in civilian clothes. Human Rights defenders and activists believe that Mamamdli’s Facebook post calling for peace and criticizing president Aliyev is the main reason for his arrest.

Police have not provided any information about the reasons for Ahmed Mammadli’s detention and his whereabouts.

Activist Aziz Mamiyev said that he was threatened for supporting Ahmed Mammadli. Mamiyev wrote: “I just received a threatening message. How many times have I been threatened because I defended Ahmad? According to what they said, by this time tomorrow, they will take action to arrest me again. As a rule, Azerbaijani law enforcement agencies are indifferent to such issues, and after a short period of time, arrests are made. Past experiences show that in many cases, warnings are made by their own people. Look at the country we live in.”

Another veteran attempted suicide. Veteran Elmir Abdiyev tried to commit suicide by burning himself in his hometown Shirvan. It is reported that Abdiyev took this step in protest against the actions of the police. The veteran is hospitalized and is in critical condition.

At the court hearing of the former minister of labor and social protection, Salim Muslimov, it was revealed that a large amount of state funding was written off the budget under the name of “purchase of wheelchairs for the disabled”.  According to the investigations, various companies were established in the name of individuals, such as the driver of the funeral car or guards. Those companies were declared winners in the tenders held by the ministry. Only a small part of those funds was used to buy equipment, and the rest was returned in cash and misappropriated.

A year-long trial of General Movlam Shikhaliyev, who headed the Main Investigation Department of the Ministry of National Security (MTN) for many years, and colonels – department heads Vusal Alekbarov, Yasin Mammadov, deputy chief Sahib Alekbarov, who worked in this department, has been concluded. On September 21, they were sentenced at the Baku Military Court. According to the verdict, Movlam Shikhaliyev was sentenced to 12 years of imprisonment. Shikhaliyev was found guilty of embezzling more than 20 million manats of state funds. The court decided that the real estate worth 7.7 million manats in his name and his family members should be confiscated. Major General Movlam Shikhaliyev was awarded the “For the Motherland” medal and the “For Service to the Motherland” order by Ilham Aliyev.