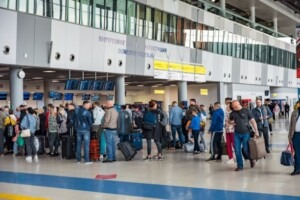 “Aliyev regime is thinking of various political measures to prevent changes that have already begun in the region.”

Crisis on the Russian border

In a short period of time after the mobilization was announced in Russia, thousands of Russians started fleeing the country. Many Russian citizens of Azerbaijani origin are stranded at the border because Azerbaijan’s land borders were closed two years ago when the pandemic hit. While this situation caused a crisis on the border, many activists and opposition called on the authorities to open borders and welcome Azerbaijanis fleeing the war. Chairperson of APFP Ali Karimli said that “every day that the country’s land borders remain closed poses a deadly threat to the lives of thousands of Azerbaijanis living in Russia.” Karimli wrote: “At a time when our compatriots living in Russia are fighting for life, it is a shame to close the doors of the Motherland in their face. We should not simply sit and observe that tens of thousands of our compatriots are falling victim to Putin’s ambitions and unjust wars.”

Chairperson of ADWP Gubad Ibadoghlu also commented on the border crisis, saying that land borders with Russia should be opened and people should be allowed return to their homeland. Ibadoghlu wrote: “Taking into account that most of them have dual citizenship, the Azerbaijani authorities should take care of its citizens and call them to refrain from participating in the war against Ukraine.”

Member of NCDF Tofig Yagublu argued that Aliyev is helping the kremlin by not allowing people who refuse to take part in the war against Ukraine. Yagublu wrote: “By keeping our land borders closed, Aliyev is preventing our compatriots from avoiding this unjust and perspectiveless war. They will be the victims of fascist Putin’s military adventure, which will inevitably end in defeat. I would not be surprised if Aliyev decided to deport our compatriots, who managed to come to our country back to Russia.”

Azadliq newspaper reports that Mahir Babayev, who made and shared a video criticizing the termination of child benefits, was arrested and sentenced to 30 days of administrative detention.

Azerbaijan Popular Front Party announced that on September 30, at 4:00 p.m., a protest rally will be held in front of the Milli Majlis building to protest the reactionary new draft law on political parties. The Party has sent a letter to the Baku City Executive Power regarding the event. Member of the Party Tofig Yagublu said that “this action is completely legal and the authorities do not have the right to say to object to it.” In his Facebook post, Yagublu called his followers to join the protest: “Even if the authorities violate the law and say “no”, this does not change anything, and the protest will definitely take place. You are all welcome. Share this very important event now. The world is changing, and Azerbaijan will also change.”

Chairperson of ADWP Gubad Ibadoghlu commented on the protests in Iran and the mass exodus of Russian men trying to avoid mobilization, saying that it is the beginning of the end for the despotic regimes in the region. Ibadoghlu wrote: “As it can be seen, this time, the changes start from the despotic regimes in the region where Azerbaijan is located. One of the most worried about this is the Aliyev regime, which has been in power for 29 years. The Aliyev regime, which bowed to Russian imperialism during its entire existence and became a member of the despotic alliance created in the region under Putin’s leadership, is afraid of the wave of democratization in the post-Soviet space. This regime especially does not wish for the democratization of the neighboring countries. It understands that none of the authoritarian regimes in the post-Soviet space will be able to continue in the face of this wave. After all, Azerbaijan isn’t an island in the Ocean, so it would not be left out of this process. Aliyev’s government is thinking of various political measures to prevent changes. The new draft law “On Political Parties” is of this kind. False patriotic propaganda is carried out in order to prolong the life of the fallen government. Therefore, do not buy that propaganda, instead, be optimistic and alert because new and interesting processes await us.”

The Prosecutor General’s Office said that on September 13, the founder of  “Kanal 13” Aziz Orujov, posted videos on the YouTube channel that undermined “the business reputation of the Azerbaijani Army, and overshadowed the work done in the direction of strengthening the state’s defense capabilities.” Orujov denied the accusations, saying that “Kanal 13” was punished for its coverage of sensitive issues with criticism.