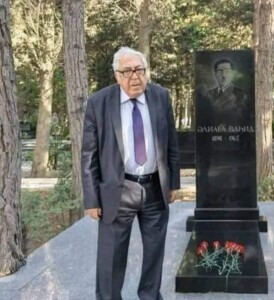 “Because Chingiz Abdullayev does not have the power that Ilham Aliyev has, he contented himself with scolding the journalist...”

Rally in front of the Baku City Executive Power

Activists of the Azerbaijan Popular Front Party (APFP) held a rally in front of the Baku City Executive Power. They demanded radical democratic changes, including freedom of assembly, free elections, and the release of political prisoners. Members of ADWP and Musavat Party also joined the rally. The police intervened in the protest, and dozens of participants were violently detained. According to the APFP, about 200 activists were detained. Members of the party said that, in the morning, before the start of the rally, the police set up checkpoints in front of the houses where the organizers of the event live and prevented them from leaving their houses. Some of those who wanted to attend the rally were detained in the area where they lived and taken to police stations. Hours before the protest began, the area where the rally was planned to be held was under police control, and the free movement of people was restricted. Despite the police intervention, the members of the APFP and other people who joined them succeeded in voicing their demands. Among those detained, many have been subjected to violence. Activist Aziz Mamiyev wrote on Facebook that he was forcefully rushed into the police car and severely injured. Mamiyev’s post read: “I left the police station, and I did not realize that I was bleeding until my friends said that my face was bleeding. What is really concerning is that when they (the police) forced me into the car, they hit my kidney so hard that it was severely injured. At the moment,  I did not, but now I can feel the pain. When I was arrested and tortured in July, my kidney was severely damaged.” In his later posts, Mamiyev wrote that he was taken to the hospital due to severe pain. “I could not bear the severe pain. I am currently in an emergency. The diagnosis is that kidney enlargement is caused by trauma. This is a masterpiece by the family rule.” Mamiyev also said that, as usual, before the rallies, political activists leave their houses and they stay in different apartments so that they can participate in the rallies. “Because the country is ruled by a complete authoritarian regime”, added Mamiyev.

Chairperson of the APFP Ali Karimli thanked the participants of the rally and everyone who supported it, dedicated journalists and bloggers who covered the event and demanded the immediate release of those detained. In his Facebook post, Karimli addressed the public, calling for active participation. “The conscience of the Azerbaijani people should protest against the police violence, this brutality, this anti-human treatment. In yesterday’s protest, about 200 people were violently detained, and we identified 158 of them (the list is in the comment section). Members of the APFP, other Party members, and active citizens, who joined the peaceful protest, simply demanded rights and freedom for everyone from the authorities. They are not the enemies of this state but the people who built this state, who are ready to die for their state and love this country and the nation. However, the corrupt gang that usurped the power treated those peaceful protesters in a hostile manner.”

What also marked the event was the 1st deputy chairman of the AWU, writer Chingiz Abdullayev’s discourteous reactions to a journalist’s question about the expenses of the Union. Around 20o,000 manats were allocated from the state budget to organize the congress of the Union. When a journalist asked Abdullayev about spending the funding, the writer, in response, asked the journalist, “aren’t you ashamed to ask such a question, are you not ashamed to death?” Abdullayev’s response to the journalist caused debates on social media, with many condemning the writer.  Journalist Seymur Hezi reacted to the event and said that the regime needs the Writers Union in order to stay in power. Hezi wrote: “Anar is a relic of Stalinism, just as Aliyev is of Stalin. A political system cannot survive without the elements that make up its aesthetics. Aliyev can maintain power without Kamaladdin, but never without Anar. It is the literature that creates the people and shows them who they are. Now you know why the repertoire of theaters has been the same in its content for 30 years, and it is almost a complete repetition. That’s exactly the reason.”

Activist Ilkin Rustamzade also commented on writer Abdullayev’s treatment of the journalist, saying that Abdullayev is “a palace flatterer.” Rustamzade wrote: “Chingiz Abdullayev is not the writer of the people, but of the palace. He created an NGO called PEN and presented himself to the public as the head of the Azerbaijani office of the famous PEN Club. He is a fraud. I wrote about it when I was at the PEN Congress in Uppsala. And even though the government gave millions to him and others like him, his words are not as powerful as ours. Because they sold their pens.”

Member of the NCDF Tofig Yagublu said that Soviet time organizations such as Writers Union should not be financed by the state. Yagublu wrote: “Why should the Union of Writers be funded by the state? This harmful approach of the Soviet era must be abandoned. Such associations should be established on a public basis, and their funding should be through membership fees, donations, and grants. The congress of the Union of Writers was held, and more than 203 thousand manats were spent on this event from the budget of the state in a country where due to financial difficulties, war veterans committed suicide by burning themselves. A journalist asked the deputy of this Union, writer Chingiz Abdullayev, about how to spend the allocated money, and this man answered him that “you should be ashamed of yourself for asking such a question.” What he meant was that they have spent even more, and we should be ashamed to ask where it was spent. He is just like Ilham Aliyev. He imprisons journalists who ask him about the state budget, beats, kills, expels them from the country. Because Chingiz Abdullayev does not have the power that Ilham Aliyev has, he contented himself with scolding the journalist.”

Academic and member of parliament Isa Habibbayli was elected president of the Azerbaijan National Academy of Sciences (ANAS). The head of the Department of Humanitarian Policy, Diaspora, Multiculturalism and Religious Affairs of the Presidential Administration, Farah Aliyeva, members of the Presidium of ANAS, and full members and corresponding members of the Academy participated in the meeting of ANAS held on October 25. Habibbayli’s son Arastun Habibbayli is the head of the humanitarian affairs department of the Cabinet of Ministers,  and his other son Sahat Habibbayli is the chairman of the Nakhchivan State Customs Committee. His daughter Gunay Masimova works as a chief notary at the Notary Office of the Ministry of Justice.

It is reported that soldier Mayil Kazimov killed himself in a military unit in the Nakhchivan Autonomous Republic. According to the information provided by the soldier’s relatives to Meydan TV, Kazimov was a commander in another military unit. According to the Military Prosecutor’s Office of the Republic of Nakhchivan, an investigation is being conducted into the fact that Mayil Kazimov Ramig oghlu, born in 1999, died as a result of a shot from an automatic weapon assigned to him. Murad Shahbazov, another soldier on leave from military service, committed suicide. Shahbazov born in 2003, hanged himself in the house where he lived in Guneshli village of Jalilabad district. The General Prosecutor’s Office confirmed the information and added that it was investigating the soldier’s suicide. However, the cause of suicide has not yet been determined.