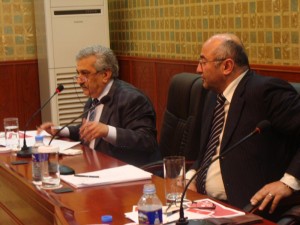 On December 4, conference on “Development of Liberalism in Azerbaijan and Turkey” organized by the Center for National and International Studies was held in Ganja. The conference was the organization’s first conference among the conferences covering 2010-2011 and supported by National Endowment for Democracy.

Leyla Aliyeva, president of the Center of National and International Studies and political analyst opened the conference and emphasized that it is difficult to speak about liberalism today. However, the theme is very topical and it is admit unambiguously in society.

Irada Baghirova, a historian, head of the department of the National Academy of Sciences spoke about the history of liberalism. “The foundation of the Azerbaijan People’s Republic established in 1918 was precisely built on the liberal principles. However, today liberalism tendency is undergoing crisis in Azerbaijan. But let’s not forget that the most developed countries around the world were established and exist on the basis of liberalism.” – emphasized Irada Baghirova.

Expert Niyazi Mehdi touching upon the philosophic aspects of liberalism said that: “first of all, people should understand the meaning of “freedom” and struggle for their rights and not be ashamed of it.”

Hasan Huseynli, representative of Ganja city, a well–known expert, head of the “Kamil Vetendash” (“Intelligent Citizen”) Enlightenment Center Public Union started his speech with the questions: “Has this topic been publicized in Azerbaijan? How much has this sphere studied?” Hasan Huseynli stated that in reality Azerbaijan society is far from liberal society. Only at early 90s, attempts were made for promotion of liberalism ideology, but then this process has stopped.

Then the word was passed to Turkish guest Huseyn Dayi, writer of political essays of the“Onje Vatan” newspaper. In his speech Huseyn Dayi spoke about the development of liberalism values over the history of Turkish people and informed on the status of liberalism in Turkey.

Then the conference continued with debates and discussions.