FB users continue to share information about state of health of the human rights defender Oktay Gulaliyev, who was hit by a car and while in coma has been treated in Turkey. They share the appeal by Taleh Khasmammadov who informed that the family members have support for his treatment only for 17 days, and they do not know what will happen after that.  The FB posting calls on to financially help the family to continue treatment. They also shared most recent information, that after the second surgery there is a possibility that Gulaliyev will get out of coma condition.

The news about poisoning of three female students- of the Baku State University after they ate in the University students’ café, resulting in the death of one, is widely shared and commented by the users. Ilkin Rustamzade, the leader of NIDA movement writes in shock, that while trying to get an information from students, who gathered in front of the hospital, he was met with silence and responses that the University high level administration pressured them not to discuss this issue. People mourned the death of 20 year old Sheker  Hasmatova.

FB users continue to discuss the unimpressive intervention of the pro-government  Ata Abdullayev who exposed his lack of sophistication while asking the question  about Karabagh the prime minister of Armenia after his speech during the Q and A session. The video of the Q and A session caused the wave of commentaries on what many called embarrassment and fiasco of the government policies. The NGO activist Anar Mammadov saw this as a natural result of the crackdown on civil society, which made leading national experts on Karabagh issue flee the country and become refugees, and the government is left with totally incompetent people to deal with the informational aspects in the Nagorno Karabagh conflict. Fuad Hasanov, an NGO leader, writes on his FB page: “ This intervention of Ata Abdullayev means requiem in memory of the government’s… Unable to hold the dialogue with its own population, it holds monologues,  who nobody listens to, internationally”…Altay Geyushov of REAL, and a scholar, comments:” As  person, who is often abroad, I can assure you, there is not such a reputation of our country “to deteriorate”, as the country where the father passes the post to the son, while the latter appoints his wife a vice-president is viewed as the feudal one”. NIDA youth movement leader Ilkin Rustmazade comments: “ The government will not be able to recover the damage of the 1min intervention by Ata Abdullayev for years… but I wonder how come that such devoted activists like SEymur and Nigar Hezi were denied visas abroad, while such hopeless ones are freely travelling back and forth?” The journalist Konul Ali ironically writes, that after the “ success” of Ata Abdullayev she expects the government to appoint him a minister. The journalist Shahveled Chobanoglu commented: “ Even the enemy would not do that… We are ruled by Ata Abdullayevs.. They robbed the country and they are not better than him.. With our potential we could be a prosperous, free and civilized country..  Even the enemy could not make this damage…”

FB users continue to share the information, photos and videos about the camps and repressions against Turkic speaking Uygurs in China.

The information about the new ombudswoman – the wife of notorious MP Siyavish Novruzov ( deputy executive secretary of the ruling party YAP) Sabina Aliyeva — is shared with irony and sarcasm on timelines. The young feminist Rabiyya Mammadova comments: “ What a comic country I was born in?”

Avaz Hasanov, one of the leading experts on Nagorno Karabagh conflict resolution, characterizes Alovsat Aliyev, who was in exile and whose name was also mentioned among others in connection with scandal with the fake ID in Germany, as the best in the country professional on migration and the related issues and tells a few stories, where he showed himself as a considerate and responsible person.

Seymur Hazi shared posting by the scholar in exile Leila Alieva warning about tendency of young parties and organizations focus on “ discrediting” other democrats and opposition rather than on the criticism of government. She says this is very much in the spirit of the 1930s. The other discussant asks whether this is not a clear indication, that these parties are artificially created by the government so to run campaigns against the traditional opposition parties?

The activists continue “to name and shame” by sharing the videos ( Meydan TV etc.) and photos of the police and agents in civilian cloths, who violently suppressed the rallies of opposition.

The journalist Ruzgar Movsum shares the photo of two women sleeping on the bus station commenting: “ this is an example of hundred thousands new jobs opened by the president Aliyev” 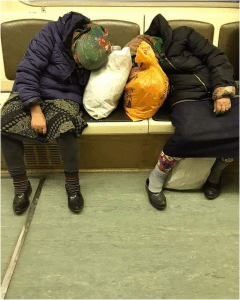 The commentaries under the photo include such as “ Horrible” etc.

People share the information related to the commemoration of Euromaydan protests in 2013 in Kiev. They mention that there were 100-150 victims among protesters and near 20 among the government forces.

FB users continue to discuss the issue of domestic violence. Aytan Gahramanova writes from abroad: “ All the traditional societies in their relation to the domestic violence look alike. Not only they do not consider psychological pressure as the basis for divorce, but  often even the physical violence too.  They think that there should be some more “serious” argument for a divorce. Even absence of feelings is not considered such an argument…. AS usual relatives advise you to reconcile. One usually responds: We did not argue to reconcile.. But if the legal defenders in response to your compaints about psychological pressure say: This is because he loves you, that’s why he controls you”, what kind of society is this? If so, then for women in Azerbaijan it is better to stay single than to get married”

The other female scholar  who lives abroad  comments with irony: “ Apparently, the “serious” reason is when the man finds himself another woman. If a woman however finds herself another man- then it is a serious reason for a killing”