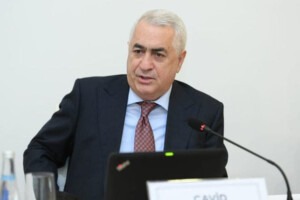 “The Russians will prevent the peace and security in the region by not leaving the territory of Azerbaijan...”

Member of APFP Tofig Mammadov’s property was seized by the police, and he started a hunger strike in protest. According to activist Aziz Mamiyev, one day before the rally on September 29, Mammadov received a call that the police were looking for him. A few moments after the call,  Mammadov’s shop was raided by the police, and the devices and equipment at his shop were taken away. Mamiyev wrote on social media: “Everyone knows that Tofig has a small shop near the Insahatcilar metro station. All of his sales counters, goods, and scales were taken away. The employees of the Yasamal District Executive Authority took away everything. Because Tofig Mammadov is an active member of the PFLP, he actively participates in all rallies. Look, this is the true face of the Azerbaijani authorities. They play with people’s lives. People of this country are being tested with a piece of bread. This is how they destroy people who earn their bread with hard work. For those who don’t know, Tofig has started a hunger strike since yesterday. If anything happens to him, the government is directly responsible.”

The parents, whose children were not given the status of martyrs, protested in front of the Milli Majlis. On October 5, the parents who held an action in front of the Milli Majlis said that their children had not been given the status of martyrs, even though they had lost their lives in the battles. “My son was on duty at night 150 meters away from enemy positions; he was killed, and they found his dead body in the morning. The bullet hit him in the back, wounding his heart, but in the official papers, they wrote that he died of heart failure. I have the evidence, but the Tartar court covered up the case,” said one of the mothers. According to the parents of the deceased soldiers, they repeatedly appealed to the state institutions, including the members of the Milli Majlis, but no one listened to their complaints.

On Tuesday, animal rights defenders held a protest in Fountain Square with the slogan “Stop shooting the dogs”. Activists protested the shooting of stray dogs by local law enforcement agencies. The police immediately intervened in the protest and arrested seven activists. They were released after being detained for a short time at the police station. Animal rights defenders frequently express their concern about the mistreatment and abuse of stray dogs in Baku.

Chairperson of Azerbaijan Democracy and Welfare Party (ADWP) Gubad Ibadoghlu has launched an online campaign with the demand to withdraw the Russian army from the Karabakh region. “I believe that the people of Azerbaijan should assess the dangers and risks in time, start taking action now and demand the withdrawal of the Russian troops from our territory. Otherwise, the Russians will prevent the peace and security in the region by not leaving the territory of Azerbaijan not only until November 10, 2025 but also in the next five years”, said Ibadoghlu. The Chairperson of ADWP also announced that the Party will organize a protest in front of the Russian embassy with the slogan “Let the occupying Russian troops leave Karabakh” on October 7 at 2 pm.   “Remember, now is a good time to do it, and if we persist, the Russians may withdraw their troops,  especially at the time of difficulties they face in terms of military mobilization”, added Ibadoghlu.

Baku City Executive Power did not grant permission to organize the rally by the ADWP  stating that “the venue is inappropriate”. However, the Party issues a statement saying that they would continue with their plans of organizing the rally.

Chief Anti-Corruption Department under the Prosecutor General conducted an operation in the Lankaran City Executive Authority, and the Chief Architect Elgun Abdullayev and several other officials were detained.

Economist Rovshan Agayev, in his article published by the Baku Research Institute, writes with reference to official statistics that in the last two years (2021-2022), the level of inflation in Azerbaijan has exceeded the growth rate of per capita income of the population almost 5-6 times.

“When the cost of the basket of necessary food and utilities is taken as a basis, although the cost of living has increased by more than 75 percent in the last six years, the average wages have increased by almost 65 percent, and the average income of the population has grown at a slower pace,”

“Azerbaijan attacked the territories of Armenia”, said Josep Borrel, the High Commissioner for Foreign Relations of the European Union, on Tuesday. Josep Borrel added that Azerbaijan is occupying Armenian territories. However, Josep Borrell said that the European Union is not considering the issue of sanctions against Azerbaijan, including the cancellation or freezing of the gas contract. The EU High Commissioner for Foreign Affairs emphasized that Brussels demanded Baku withdraw its troops and investigate the video of the execution of prisoners that were released recently.

Javid Gurbanov, deputy minister of the Ministry of Digital Development and Transport, made headlines when he said that “the number of trains is sufficient, but the number of passengers is too much”. Gurbanov’s words were met with sarcasm by many people, and he was accused of not taking the issue seriously. Baku-Sumgait trains are usually overcrowded, and the passengers complain about the frequency of the trains.

Like in many countries, in Azerbaijan, October 5 is celebrated as Teachers’ Day. Many experts explain the low level of education and corruption with the low wages of teachers. According to the official statistics, the number of school teachers in Azerbaijan is close to 140,000, of which 4,439 have a teaching load of 6 hours a week, and their salary is 150 manats per month, while the workload of about 100,000 teachers is between 12-18 hours, with the salary of 400-600 manats. Only 35,561 teachers have salaries varying between 800-1000 manats. The average monthly salary of school teachers in the country is 60o manats.