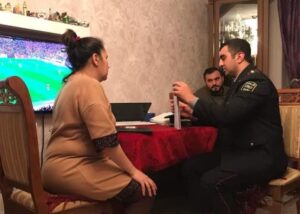 “Russia’s fifth column is in power in Azerbaijan and is in opposition in Armenia.”

Journalist Ayten Mammadova was attacked in the elevator of the apartment building she lived. A man who followed her into the elevator put a knife to her throat and threatened her not to write about the trials she was covering. The most recent case that Mammadova is writing about is the case of Ilkin Suleymanov, who is accused of murdering a ten-year-old Narmin Guliyeva. Colleagues of Mammadova said that the coverage of Suleymanov’s trial is the main reason for the attack. Independent lawyers believe that Suleymanov is innocent of the crimes he is accused of.

Member of NCDF Gultakin Hajiyeva showed solidarity with Mammadova asking everyone to write about Narmin Guliyeva – Ilkin Suleymanov case. Hajiyeva wrote: “While condemning this act of aggression against Ayten Mammadova and demanding that the perpetrators be found and punished, I declare that from now on, I will write about the case of Narmin Guliyeva and the horrible facts of fraud that are found out. Let’s all write so that they see that Ayten is not alone! Let us all write so that the real criminals do not deviate from justice and destroy the life of an innocent person.”

Exiled journalist Ganimat Zahid argued that the  Suleymanov is innocent, and his trial is arranged to hide the real perpetrators. According to Zahid, “Minister of Internal Affairs, the chief prosecutor and the Minister of Justice know who is in the organized group involved in the abduction and sale of minors and teenage girls in Azerbaijan.” Zahid also added that the group of organized crimes who are engaged in this crime is connected to the high-ranked officials.

Activist Bakhtiyar Hajiyev reacted to the attack by saying that “no one, whether from the opposition or the ruling media, should remain silent in the attack on Mammadova.”.

According to the member of NCDF, Tofig Yagublu, president Ilham Aliyev is personally responsible for such criminal acts. Yagublu argued that “crimes against journalists, politicians, and activists (crimes that were committed in public) are not disclosed during his tenure, such crimes are stimulated by him, and a specific atmosphere of impunity has been created in the country”.

In Agdash, Jafarov Ibrahim Jafar oglu was detained and taken to the police station, where he was beaten to death. Journalist Ganimat Zahid reports that police officers Vusal, Fagan and Allahverdi were involved in the murder of Ibrahim Jafarov. A forensic medical examination in Agdash (expert Nasir Yaramaz) gave a false opinion on the death of Ibrahim Jafarov, after which the body was taken to Yevlakh. Expertise in Yevlakh confirmed that  Jafarov’s body shows signs of torture.

Recently, representatives of the Russian Federation have voiced views at international events that there are centers in Azerbaijan that conduct research on biological weapons with the financial support of third parties. The State Security Service (SSS) has responded to Russia’s accusations of biological weapons against Azerbaijan, saying that such centers have never operated in Azerbaijan. According to the SSS, no research has been conducted that could harm the health of the population of the citizens of neighboring countries. Many journalists and activists believe that such accusations by Russia against Azerbaijan should be seen as a sign of Russia’s future aggression.

Chairperson of ADWP Gubad Ibadoghlu said that “Russia’s fifth column is in power in Azerbaijan and is in opposition in Armenia.” According to Ibadoghlu, because of this, “Russia has more opportunities to commit provocations in Azerbaijan than Armenia, and they have not yet used all the opportunities of provocation.”  Ibadoghlu added that Azerbaijani society should be vigilant at this critical time we live in and take into account that “the Russians have long hands in Azerbaijan, and they are very good at sabotage, provocation, and fomentation.”

On May 9, an event dedicated to Victory Day, a national holiday in Russia commemorating the Soviet Union’s defeat of Nazi Germany in World War II, was held at secondary school number 164 in Baku. “Georgi ribbon,” which is belived to be the symbol of Russian imperialism, was attached to pupils’ chests. Independent journalists report that the director of the school Kamala Anvar gizi Gadirova, is known for active role in election fraud. She is also the wife of Farzali Gadirov, Deputy Chief of Staff of the Ministry of Education, who was awarded the Progress Medal by Ilham Aliyev. The school won the “Best School” competition in 2010 by the order of Ilham Aliyev.

Tofig Yagublu argued that, Gadirova, deliberatly and knowingly, organzied the event to justify and support Putin’s military aggression against Ukraine. Yagublu said that, at the very least, Gadirova should be dismissed immediately and banned from pedagogical activity.

Azadliq newspaper shared an investigation on the involvement of the officials of the State Customs Committee and entrepreneurs close to them in smuggling large quantities of cosmetics from Iran, Korea, and other countries. According to the research, the poor quality beauty products that are not passed through customs clearance and safety checks are distributed to clinics and beauty salons in the country. These smuggled cosmetics contain chemicals and heavy metals, which is believed to have serious consequences for human health, especially for the skin. The article ended with an advice to the women to ask their cosmetologists or dermatologists for a hygienic certificate of the product offered to them.

Relations between Armenia and Azerbaijan

Hikmet Hajiyev, foreign policy adviser to the Azerbaijani President, met with Armenian Security Council Secretary Armen Grigoryan in Brussels on May 2. After returning to Yerevan, Grigoryan held a briefing on the results of the meeting, announcing that the peace talks should begin on the basis of the “5 + 6” formula- five points proposed by Baku and six demands submitted by Yerevan. This formula envisages combining the principles from both sides. Grigoryan noted that Azerbaijan insists on the mutual recognition of sovereignty, territorial integrity, future renunciation of territorial claims, delimitation, and demarcation of internationally recognized borders (according to the Soviet era), the conclusion of a peace agreement, and the Armenian side accepts this. However, Armenia demands guarantees for the security of the Armenians of Karabakh and giving them a certain status. According to Grigoryan, these issues are being discussed with Azerbaijan. Grigoryan also said that the return of enclaves between Armenia and Azerbaijan will not take place, and that three Azerbaijani enclaves and one Armenian enclave occupied in the early 1990s will not be exchanged.

Chairperson of ADWP Gubad Ibadoghlu critisied the Azerbaijani authorities for not sharing the results of the meeting with the public. According to Ibadoghlu, “Hajiyev most likely reported the meeting only to the president, and although the public has the right to receive information about such an important meeting so far neither the president nor his aide have released any news.

The number of checkpoints and the list of territories where the state border of the Republic of Azerbaijan is located approved by the Resolution of the Cabinet of Ministers of the Republic of Azerbaijan has been changed. Thus, new checkpoints have been set up at the state border in the liberated Gubadli and Zangilan districts, at the newly built Fizuli International Airport in the liberated Fizuli district, and at the Zagatala International Airport. However, Lachin region is not included in this list of territories with new checkpoints. According to Gubad Ibadoghlu, there can be two reasons to explain this situation: there won’t be any checkpoint on the Lachin road on the border with Armenia; Lachin road is closed for traffic. Ibadoghlu argued that the probability of the second option is close to zero because this road is currently under construction. “The only hope is that the list of checkpoints will be updated again after the construction of the road is completed,” said Ibadoghlu. According to him, the withdrawal of armed forces from Karabakh and the establishment of a border checkpoint and customs posts in Lachin are important problems facing the government, and without them, it will not be possible to ensure the sovereignty of Azerbaijan over Karabakh.