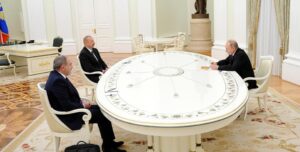 “It is neither a coincidence nor a sign of good intentions that Russia grew interested in Azerbaijan.”

Elshan Abbasov, a member of the Muslim Union Movement who was arrested on trumped-up charges, is held in an overcrowded prison in Kurdakhani. The prison barrack where Abbasov serves his sentence has only eight beds, but at the moment, there are 16 prisoners sharing the same barrack. Journalist Afgan Muktarli reports that Abbasov is not allowed to meet with family members. Another prisoner, Malik Rzayev, who was arrested after being deported from Germany, is also not allowed to see his family. Despite the appeal of Rzayev’s lawyer Nemat Karimli, the administration of the prison illegally banned the meetings.

The trial over the murder of 27-year-old transgender Nuray (official name is Ahad Nuriyev) in Puta settlement, Garadagh district, has been completed. On April 8, the Baku Court of Grave Crimes found Mirshahid Mehdiyev guilty of murder and sentenced him to 9 years in prison. The public prosecutor said that due to the consideration of the reconciliation between the victim’s family and Mehdiyev and the children in his care, his sentence was reduced from ten years six months to nine years. Following the murder of Nuriyev, a group of LGBT activists held a rally in front of the Garadagh District Police Office and the Ombudsman’s Office. They blamed blogger Sevinj Huseynova for the incident: “After Nuray celebrated her birthday in a wedding dress, Sevinj Huseynova spread hate speech against her and all of us. The result is that a young person was killed and then burned.”

Veteran Davud Bagirzadeh, who voluntarily took part in the 44-day war and was awarded medals for the liberation of Khojavend and Fuzuli, has not been able to receive a degree of disability. His arm, leg, and neck were severely wounded during the fights. “I have so much pain in my back that I can’t sleep until the morning,” said the veteran, who is in poor financial condition. The Ministry of Labor and Social Protection denies that Baghirzadeh has a disability and that he has no health complications. Activist Bakhtiyar Hajiyev reacted to the veteran’s case, criticizing the government for its failure in providing support to veterans. Hajiyev wrote: The ministry is legally transferring tens of millions of dollars from the state budget and World Bank loans to the companies of the minister and deputy ministers. But when determining the degree of disability of a veteran, they argue that they can not do anything.”

In Baku, one of the major roads was again closed as the president Aliyev was expected to attend the opening ceremony of a school. Activist Bakhtiyar Hajiyev urged the authorities to put an end to “the shameful practice”. Hajiyev wrote: Roads are closed in the morning again, just because that a president, who is afraid of his people will cut a red ribbon somewhere. People are rushing to work, running late for their appointments with the doctor, arguing with the police while the police should have been busy with more important issues.  It is all because someone needs the support of religious people during Ramadan, so he should attend the opening of a religious school, abusing the rights of so many people in the morning. It is necessary to put an end to this shameful practice. Either hold an online opening ceremony from the palace or cut that ribbon with the use of a chromakey. You are oppressing the people just to cut a ribbon.”

Chairperson of APFP Ali Karimli urged the government to pay attention to the war veterans. Karimli wrote: Should we ask the Aliyev regime to be ashamed for taking full credit for the military victory achieved at the cost of the lives of our martyrs and veterans and for condemning the war heroes of Azerbaijan to poverty in return for their services?  Should we ask why the $ 1.5 billion earned every month due to rising oil prices is not spent for our people?”

Chairperson of ADWP Gubad Ibadoghlu also pointed out the rising oil prices criticizing the government for failing to improve living standards. Ibadoghlu wrote: Instead of directing the additional oil revenues from the rise in prices on world markets due to Russia’s aggression against Ukraine to improve the well-being of the population, the government is now preparing to raise transport fares and gasoline prices. Living conditions for April will be worse than before, given the rising costs of food, household goods, and medicines, which are constantly rising. Under the current circumstances, for those who exceeded the limit on low gas tariffs in March due to cold weather, the debts will be unavoidable. If the government believes that it compensates for inflation-related expenses by paying 50 manats to a pensioner every three months, then the government’s calculations are incorrect. Poverty has recently led to an increase in thefts and in crime rates. I think that there is a need for additional social protection measures, especially for the low-income population, due to rising utility and transport costs. I have to mention that the two-month surplus (excess funds) of the Azerbaijani state budget as of March 1 amounted to 1 billion 941 thousand manats. I want to say that there is money in the budget, they just do not give it to the poor, and those who have the right to receive the benefits can not get it.”

Independent journalists have reported that a new wave of price increases is expected by mid-April. Nineteen transportation companies have already appealed to the Tariff Council to increase fares on public transport. Bus fares are expected to rise in the coming days. Moreover, Azersu-the water supplier, has also proposed to the Tariff Council to increase the current water tariffs.

Peace Talks between Armenia and Azerbaijan in Brussels

Azadliq newspaper reports that upon their return from Brussels, both Pashinyan and Ilham Aliyev called Putin and briefed him on the Brussels talks. An official statement issued by the Kremlin’s press service on Putin‘s telephone conversation with Aliyev and Pashinyan said that both sides are committed to the trilateral agreements between the leaders of Russia, Azerbaijan and Armenia dated December 9, 2020. Azerbaijani opposition called the Kremlin statement “a blow to the initial agreements reached by Aliyev and Pashkina in Brussels.” Member of Fuad Gahramanli argued that the problem is not only that Ilham Aliyev and Pashinyan felt obliged to immediately inform Putin about the Brussels talks but also Kremlin ignored the outcome of the Brussel talks. Gahramanli wrote: Aliyev and Pashinyan were encouraged by the support of the US and EU leaders and eventually reached important bilateral agreements in Brussels. First, the drafting of a peace agreement was entrusted to the Foreign Ministers of Azerbaijan and Armenia without any third party. Aliyev and Pashinyan agreed to set up a  bilateral (non-third-party) working group to resolve border delimitation issues by the end of April. However, according to the Kremlin, Russia is returning Aliyev and Pashinyan to a tripartite (Russia-Azerbaijan-Armenia) format that does not promise any prospects for peace and only serves to prolong the conflict.” Gahramanli argued that the kremlin statement once again reaffirmed that Russia is an obstacle to both peace and freedom in the South Caucasus, and only with the collapse of authoritarianism in Russia, a lasting peace and democratic change will come to the region.

Elnur Hasanov, a veteran of the Second Karabakh War, was killed in the Russian-Ukrainian war. His body was brought to Azerbaijan and handed over to his family, and will be buried in the Goranboy region. Another Azerbaijani, Rafael Aghayev, a businessman living in Ukraine, voluntarily enlisted in the army to fight against the occupying Russian army and was killed in one of the battles for the defense of Mariupol.

Political commentator Arastun Orujlu argued that the Azerbaijani government should take the recent growing interest of the Kremlin in Azerbaijan seriously. Orujlu wrote: It is neither a coincidence that Russia, which suffered heavy losses in the aggressive war against Ukraine, showed so much interest in Azerbaijan at such a time, nor is it an expression of its good intentions. If we look at what happened during the last couple of weeks, we see that: Russian President Vladimir Putin spoke with Ilham Aliyev on the phone three times; Russian officials have twice made open threats against Azerbaijan; Russian “peacekeepers” in the mountainous areas of Karabakh have twice committed serious provocations; Russian Foreign Minister Sergei Lavrov said that they would arm Armenia to ensure its security; Extensive issues, in particular, the “Moscow Declaration” signed between the two countries on February 22 was discussed in the telephone conversation between the Minister of Foreign Affairs of Azerbaijan and Sergey Lavrov.  This growing interest of Russia in Azerbaijan is neither a coincidence nor is it out of good intentions. Apparently, the Russian peacekeepers received instructions from the political and military leadership in Moscow to aggravate the situation in Karabakh and turn it into a hot spot again and begin provocations. Undoubtedly, Armenians will also play a role in such provocations. At the same time, yesterday’s talks between the Russian and Azerbaijani foreign ministers and today’s telephone conversations between the presidents show that Russia is very concerned about the Brussels meeting and the initial agreements there.” Orujlu argued that considering all these,  Azerbaijan should achieve the withdrawal of the Russian army from Karabakh as soon as possible.

Arastun Orujlu also argued that the war against Ukraine had revealed many important issues for Azerbaijan. According to Orujlu, “first of all, the war exposed a large part of Russia’s 5th column in Azerbaijan, which acquitted Moscow of its war crimes.”  Orujlu added that given that Azerbaijan is also a target, the recent incidents involving Azerbaijani armymen should be considered elements of a Russian hybrid war against Azerbaijan.  Orujlu wrote: “Following the dismantling of the Azerbaijani Air Force in 2014, the second crushing blow to the army in Tartar in 2017, and the subsequent shooting down of a plane piloted by Rashad Atakishiyev- all attempts were aimed to dismantle the country’s air force and were the elements of a hybrid war. At the same time, the continuous repression of servicemen in the army by the military prosecutor’s office under various pretexts, their arrest on trumped-up charges, and the systematic harassment of Turkish-educated officers were the result of a planned network of Kremlin agents stationed in the army. However, the role of a wide network of agencies located in the state and government bodies of the country is undeniable in ensuring that all of these crimes, without exception, remain unpunished to this day. It is this network that still stubbornly protects its criminal partners. Such a convenient operation would be possible only in one case – under the influence of a foreign country that manages this network of agents, and that country is Russia. This, in turn, is a sign that Azerbaijan is the next target. Therefore, the recent open threats against Azerbaijan from Russia should not be considered a coincidence.”