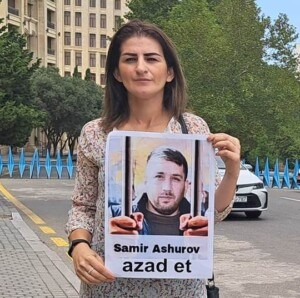 “The General Prosecutor’s Office holding a conference on media is a self-revelation and clear proof of the Aliyev government’s treatment of journalism.”

Anar Aliyev, a political activist, living in Germany, was arrested in Baku on false charges, and his wife was banned from leaving the country. Exiled journalist Afgan Mukhtarli called the activist’s arrest “an immoral act by president Aliyev”.  According to Mukhtarli, Anar Aliyev’s wife was asked to write a testimony against her husband at the Ministry of Internal Affairs. “Write a letter showing that Anar is involved in drug business, and we will let you to leave the country,” told the officials of the ministry to Mrs. Aliyeva. “Taking testimony against close relatives is prohibited by law, and therefore this was an illegal act,” said Mukhtarli.

Another political activist who was arrested upon his deportation from Germany, Samir Nura Ashurov’s family, said that they had been threatened since Ashurov’s arrest. Ashurov’s wife wanted to visit the Baku office of the UN High Commissioner for Refugees, however, she was not allowed to enter. The member of the UNHCR told Mrs. Ashurova that the organization is not dealing with the deported people. Deportations from Germany are carried out on the basis of the readmission agreement signed between the EU and the government of Azerbaijan. According to the agreement, the deportees should not be subjected to political persecution, and the homeless should be provided with shelter and employment. UNHCR has overall oversight of the agreement. The Un Commission should help those returning to the homeland, prepare small business plans, give money between 25-30 thousand manats, and donate cattle to some of the emigrants returning to rural areas. However, according to journalist Mukhtarli, the commission does not help political deportees and does not comment on their arrest. “Dozens of journalists, including myself, have sent unanswered questions to this corrupt institution, and they have not responded. They behave like Azerbaijani officials”, said Mukhtarli.

Azerbaijan plans to erect the tallest flagpole in the world. In 2010, the government spent 30 million dollars on the flag pole, which was the tallest at that time. However, shortly after its inauguration, the pole was taken down for repair. The new flag pole is going to be around 190 meters tall. The social media users mostly shared views against the new flag pole and called it another way for authorities to waste the budget money. Member of the APFP Fuad Gahramanli said that “if a country’s citizens are struggling to make a living, no matter how high its flag pole is, it won’t be on top.” Gahramanli wrote: “If the citizens do not see justice in their country, if a veteran commits suicide because of financial problems, if the country is disgraced in the world for stifling freedom of speech, violating human rights, turning corruption and bribery into state policy, if not a single scientific and technological innovation has been achieved in 30 years and if its income comes only by selling raw materials, the tallest flagpole won’t change anything.”

After an increase in the price of certain commodities, the internet has also become more expensive. The major provider, “Baktelecom,” increased internet tariffs by 70%, from 10 manats to 17 manats without prior notice. Meanwhile, the cost of flour, bread, and housing is expected to increase from next month.

Commenting on the current high rate of inflation, chairperson of NCDF Jamil Hasanli said that instead of creating a non-oil sector, the Aliyevs created the economic crisis by looting the wealth of the country. Hasanli wrote: “Aliyev talks about the impact of upcoming global crisis. The wages, pensions, allowances, and stipends provided in Azerbaijan so far have been lower than the crisis threshold. But Pasha bank received 65 million manat income in one year. For example, 60-70 percent of the country’s pensioners receive only 105-170 dollars per month. Citizens of this country work in the rural areas for 1 manat an hour, if they find a job. I wonder how much they will get when the global crisis comes. They announced an increase in the price of bread and bakery products. But the prices go up without notice. People can’t buy the goods for the same price they bought a day before.”

General Prosecutor Office a conference on “ensuring information security of the society under the conditions of media freedom and the growing influence of social networks”.  General Kamran Aliyev said the following during his speech at the conference: “We all support the policy of the state, and for the development of the state, everyone must do their job responsibly. If national security calls are made, the prosecutor’s office must take decisive steps in line with its activities. Our timely intervention when a violation of the law is about to occur is viewed negatively by some social network users. Warnings are issued to prevent more serious violations of the law. The warning is one of the steps included in the scope of activity of the prosecutor’s office.”

Activists and independent journalists believe that its the announcement of further restrictions on social media. Journalist Seymur Hezi said, “the General Prosecutor’s Office holding a media conference is a self-revelation and clear proof of the Aliyev government’s treatment of journalism.”

Meydan TV reports that Armenia relocates the Armenians of Lachin in the Upper Karabakh region and Armenia. According to the November statement of 2020, an alternative road to the Lachin corridor should be built within three years, and the Armenian-Russian-controlled Lachin city, Zabux, Sus, and Ashaghi Sus villages should be handed over to the control of the Azerbaijani Army. The corridor passes through the territory of the listed cities and villages, where  Armenian residents are currently settled. The residents are required to leave before August 25. In a video shared on social media, Armenians were seen burning their belongings and properties before leaving. The city of Lachin and surrounding villages are of strategic importance both for Armenian and Azerbaijan. According to journalist Habib Muntezir, Suren Petrosyan, chairman of the Democratic Consolidation party of the Republic of Armenia, visited the village of Zabukh to announce the organizing armed groups for self-defense of the Armenians living in the region.

The new road built by the Azerbaijani side will pass through three villages of Shusha and six villages of the Lachin region, bypassing Lachin city.

Jabbar Mammadov, a veteran of the Second Karabakh War, said that he was subjected to police brutality while protecting his property. Mammadov used to work as a barber before the war, and after serving in the army, he applied to Binagadi District Executive Authority to build a barbershop on land near his house. Although Mammadov granted the permission, the officers of the 40th police station prevented him from building a barbershop. The veteran said that the police used force against him because they took bribe from an entrepreneur who planned to seize his land.