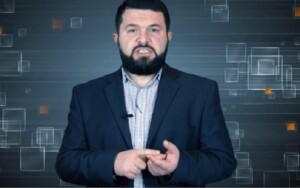 “This hostile attitude is a planned and purposeful state policy aimed at veterans and will not change.”

On social networks, active Azerbaijanis criticize the government’s policy regarding veterans. They write that the government does not provide sufficient allowances to the war participants and does not carry out the necessary psychological rehabilitation. After the war, about 50 suicide attempts were recorded among the veterans. Many social media users started protesting against the increasing suicides of veterans, the economic crisis, and corruption with the hashtag etirazedirem (I protest). Meanwhile, the participants of the war protested in front of the Milli Majlis as the number of veterans who committed suicide increased.

Veteran Elvin Jafarov’s suicide by setting himself on fire caused protests on social media. Before the veteran committed suicide, he said that the responsible state authorities did not consider his complaint and did not provide support in any way. The executive head of the Sabirabad district, Siragaddin Jabbarov, who participated in the funeral ceremony of the veteran, denied this and claimed that the veterans always are supported. Jabbarov’s words caused outrage on social media. Member of NCDF Gultakin Hajibeyli said that “instead of apologizing and resigning for the veteran’s suicide, which occurred as a result of the anti-human and anti-national management of the government, he says these words, calls the veteran a liar with psychological disorders.” Hajibeyli argued that “this hostile attitude is a planned and purposeful state policy aimed at veterans and will not change.”

Veteran Gadir Jafarov said that he would commit suicide. Activists, therefore, asked his relatives, friends, and those who know him personally to stop him and save his life. Another veteran Shikhalizade Inayat Mubariz oghlu said he would commit suicide. He is from Shuryuk village of Lankaran. According to him, there is no place that he has not applied to, no door that he has not knocked on, but no one wanted to listen to him. He received three medals for his bravery during the war, but he was denied disability status. His father was also a veteran of the first Karabakh war.

Yusif Seyfulla oglu Asadullayev, a resident of Muzaffaroba village, Khachmaz district, born in 1993, tried to commit suicide by hanging himself in his house. His family interrupted and saved him. He said that the reason for his decision was that the officials were neglecting him and were not responding to his complaints.

Participant of the Second Karabakh War, veteran Etibar Aliyev from Ganja attempted to commit suicide by slicing his arm. He said that he decided to take his life as he couldn’t receive any support from the government. Aliyev participated in the battles for Gubadli and Jabrayil during the second Karabakh War.

Commenting on the rising suicide rates among the veterans journalist Seymur Hezi said that “this is to declare war on the people, and Ilham Aliyev is crushing and oppressing the people with all his power.”

Chairperson of APFP Ali Karimli said that president Ilham Aliyev is personally responsible as commander in chief for the suicides of veterans. Karimli wrote: “Why is it that 36 servicemen committed suicide and another 16 tried to commit suicide (they were saved at the last moment) does not bother Ilham Aliyev, who presents himself as the commander-in-chief at every opportunity? Those brave men were good when they fought and liberated the lands, but now when they demand a humane living for themselves, have they become bad and useless? Why doesn’t Ilham Aliyev talk about the mass suicides of veterans? Why doesn’t he do ANYTHING to stop the massacre of veterans?”

Chairperson of NCDF Jamil Hasanli also argued that the president should be held accountable for the current situation in the country and the tragedy of veterans. Hasanli wrote: “It is Ilham Aliyev who cut off the veterans pension, lowered their ranks, and humiliated them. It is his anti-national policy, his greed to get rich, his feudal nature, and the boundless greed of the ruling family. This is the root of the problem, the tragedy of Azerbaijan, which was drowned in the smoke of the flames of veterans who set themselves on fire. They build parks, airports, and smart villages in the territories liberated by the blood of veterans and owned by the companies belonging to the ruling family. But they can’t grant a degree of disability to veterans. He breaks the pride of the heroes who came out of the war with victory by insulting and humiliating them.”

Member of APFP Fuad Gahramanli described the suicides as “a silent, civil war.” Gahramanli wrote: Once again, there is news about the death of army members. However, the victims of this war are not killed by enemy bullets, but by committing suicide, by the merciless cruelty of those who treat people with hostility and neglect.”

Exiled journalist Afgan Mukhtarli also argued that president Aliyev is responsible for creating unprecedented social inequality and injustice. Mukhtarli wrote: “It was Ilham Aliyev who looted the wealth of the country and took millions away from the country to Europe. When the veterans couldn’t find a roof over their heads, Ilham bought real estate worth $1 billion for his children in London. When the martyr families lived on rent, the Aliyevs owned countless villas in Dubai, London, Moscow, and most regions of Azerbaijan. Only Ilham Aliyev? No, his sister’s six villas worth 52 million euros were revealed in France alone.”

Director of Baku research Institute Altay Goyushov said that the reason why the situation worsens every day is the corrupt system that paralyzed all political institutions. Goyushov wrote: “It’s not the dishonest officials, it’s the system that maintains an army of thieves, corrupt bureaucrats, and trolls who deprived you of the right to vote, a fair trial, and your rights and freedoms. When you finally act together and regain your right to vote, the officials you call dishonest will be honest, and the trolls will disappear. By throwing everything at a single officer, you show that you are the reason. Because you are distracting from the target. If you don’t change the system, all the officials will be dishonest. There are no honest officials and deputies in a dishonest system.”

According to the Ministry of Defense, a junior sergeant of the Azerbaijan Army Namizad Bayramov drowned in the Mingachevir reservoir on Wednesday. The ministry said that senior sergeant Bayramov, drowned while swimming in a reservoir near the city of Mingachevir, outside the place of service.

Activist Abid Gafarov‘s arrest was described as “a continuation of repression against freedom of expression” by the lawyers and activists. “It is a politically motivated arrest, and Abid Gafarov should be released immediately,” said chairperson of APFP Ali Karimli.  Abid Gafarov was accused of insulting war veterans and was sentenced to one year in prison. However, Gafarov and activists believe that it is a trumped-up charge, and he was arrested for his active participation in the investigation of the Tartar massacre. Recently, Ilham Aslanoglu was arrested twice, and a few years ago, journalist Ogtay Gulaliyev had a car crash. They both were investigating the tortures committed against the member of the army in Tartar.