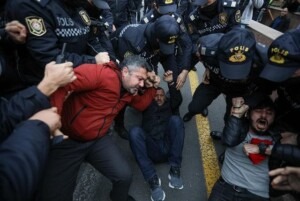 “During the presidency of Ilham Aliyev, the Russian language again became one of the main languages of communication in Azerbaijan..”

The PFP held a rally in front of the Baku City Executive Power with freedom of assembly and other demands. The police stopped the protesters who came to attend and removed them from the area by rushing them into the police cars. The deputy chairman of the Party, Seymur Hezi, said that about 200 people were detained. The police closed the roads in some areas and did not allow people to the place where the action was expected to be held. Slogans such as “freedom”, “resignation”, and “end to the family rule” were raised by the protestors.

According to the reports, Mustafa Hajili, a member of the Musavat Party and head of the Press Service, and another member of the Party, Valeh Hummatoglu, were detained by the police without giving any explanation.

Activist Nigar Hezi reported that a member of the D18 movement, Orkhan Zeynalli was forcefully taken from his apartment by the police to the police station and was sentenced to 30 days of administrative detention.

Activist Aziz Mamiyev reported that Afieddin Mammadov and Elvin Feyruzzade were kidnapped by the police. According to Mamiyev, the representative of the Ministry of Internal Affairs informed him that both Mammadov and Feyruzzade “are at the Ministry for an informative conversation, and they will be released in a few hours.”  The rest of Mamiyev’s Facebook post: “Our lives are at risk in this country. We have seen in gangster movies that people who are kidnapped and taken hostage are usually held captive by gangs and extremist groups. And, in this country, political activists are taken hostage unequivocally in police stations. I demand freedom for our friends Afieddin Mammadov and Elvin Bey!”

The chairperson of PFP Ali Karimli condemned the police brutality during the rally and called for an immediate release of the protestors. Karimli wrote on Facebook: “Although all 220 participants of the November 11 rally were released in the evening of the same day, Rovshan Mammadov, a member of the PFP, has not been released yet. There are reports that preparations are underway to indict Rovshan for breaking the glass of the police car. It is clear from the video recording that a planned provocation was prepared against Rovshan Mammadov. However, this provocation has already been exposed. The videos taken during the live broadcast destroy any claim against Rovshan Bey. Why does the Ministry of Internal Affairs insist? Do they want the whole world to know how they want to vilify an innocent citizen? Our people are already tired of police violence and political activists being defamed and arrested. False accusations against Rovshan Mammadov will increase public condemnation. I call on the Ministry of Internal Affairs not to vilify the citizen and not to commit a crime. We demand that the government stop the repressions and the violation of the constitutional rights of the citizens on the eve of the Constitution Day.”

Chairperson of ADWP Gubad Ibadoghlu strongly condemned the extreme violence of the police against protesters and journalists in the rally and called for the government to ensure the Constitutional rights of the citizens. Ibadoghlu wrote on Facebook: As a Party, we believe that what happened during the rally was a disrespect to the Constitution and the Constitution Day. The freedom of free assembly in Azerbaijan has been consistently violated and severely restricted, and the authorities have violated the fundamental freedoms of citizens. I urge the government to stop the repression.”

Speaking on behalf of the APFP, member of the Party Fuad Gahramanli said that APFP is interested in a peaceful and gradual democratic transition. Gahramanli’s Facebook post reads: “As PFLP, we are in favor of achieving the democratic change in a peaceful way, without any confrontation. We believe that the geopolitical changes in our region should affect the approach of the country’s internal processes, as well as cause certain changes in the attitude of the Azerbaijani authorities towards Russia. Otherwise, the current situation can lead to serious internal tensions. It is necessary not to forget that if the Ukrainian war is considered the most popular topic in the seemingly indifferent Azerbaijani society today, it means that the society also has an expectation. This means that the reaction of the Azerbaijani people, who are waiting for Putin‘s defeat, may be completely different in a short time. The authorities should not forget this. As PFP, we are interested in the processes moving towards democratic changes gradually, without popular unrest. The recent three rallies organized by our Party aimed to convey this message. By showing unity and solidarity around the force that has the opportunity to fight against the regime, we can achieve a strong democratic process and fight against the authoritarian regime in the country. PFP’s recent rallies should be seen as a contribution to democratic changes in the country. Because today, the PFP is not fighting for the interests of the Party, but for the creation of public resistance against the authoritarian regime in the country, and for the expansion of democratic freedoms.”

Meydan TV reports that one of the issues that have worried political activists in Azerbaijan since the end of 2020 is the pressures faced by those who call for peace and oppose the war. During the 44-day war between Armenia and Azerbaijan two years ago and after that, those who expressed that they did not want war were called to the law enforcement agencies and this still happens today.

Rashad Daghli, a well-known meykhana performer, killed his neighbor Iskandar Mehtiyev during a dispute between the two. According to the local media, the relationship between the neighbors, who have been friends for many years, has deteriorated recently due to financial issues. When the accused person Daghli was taken out of the district prosecutor’s office and taken to the scene of the incident, hundreds of his fans shouted, calling for his release. Rashad Dagli, who murdered Mehtiyev by stabbing him 14 times, turned himself in to the Yasamal police and pleaded guilty. The crime caused huge public reactions, with many supporting the performer. Human Rights lawyer Rufat Safarov expressed his disappointment, saying that, unfortunately, the general public doesn’t pay attention when an activist is jailed or tortured for their political opinions. Safarov wrote: “I came to the conclusion that if a mass event is organized for the release of Rashad Dagli, who is accused of intentional murder, thousands of citizens will rush to the scene, ignoring arrest, beating, and ill-treatment.  Rashad Amirov stabbed his acquaintance Iskander Mehtiyev a total of 14 times. This was mentioned in the investigation materials presented by Garadagh District Court. But, when the family members of more than ten servicemen who were killed in the “Tarter case”, the relatives of hundreds of servicemen who were subjected to the most severe torture and lost their health, call on the public to protest against this injustice not even ten people reacted.”

Chairperson of the National Council of Democratic Forces Jamil Hasanli reacted to president Aliyev’s statements criticizing his pro-Russian domestic policies. Hasanli’s Facebook post reads: “He goes to Russia every quarter to report to Putin that the number of Russian schools in Azerbaijan is 35 percent. In other words, one out of every three children in the country under his leadership studies in Russian. During the presidency of Ilham Aliyev, the Russian language again became one of the main languages ​​of communication in Azerbaijan. A branch of Moscow State University, not of Ankara University, was opened in Baku, and not of Hajatepe Medicine, which provides modern medical education, but a branch of Moscow State Medical University, which was useless in its own country, was opened in Baku. When I was still a member of the Education Commission of the parliament, I proposed that each of Azerbaijan’s higher education institutions should accept five students from South Azerbaijan free of charge every academic year, and the government arrested young people from the South studying at Baku University on their own without any scholarship and handed them over to the Iranian regime. During the presidency of Ilham Aliyev, 35 percent of the country’s five million working-age population left Azerbaijan and became exiles, and now they cannot return to their country because the borders are closed. Tens of thousands of Azerbaijanis have been wandering in Dagestan for months and cannot return to their home country. The pandemic has gone out of the lexicon all over the world, and Ilham Aliyev not only closed the borders to those 40 million people but even more than two million who go to neighboring countries in search of work, bread, and livelihood cannot return to their homeland. Georgian Azerbaijanis, who are a fraction of those 40 million Azerbaijani, cannot visit their relatives or go to the weddings or funerals of their loved ones. It’s easy to make grandiose statements abroad while the situation, in reality, is different.”

Member of NCDF Tofig Yagublu reacted to president Aliyev’s statement saying it is completely inconsistent with the reality in Azerbaijan. Yagublu wrote: “Here, in this country, they (the regime) exploit and repress 10 million Azerbaijanis, take away their property and rights, destroy their health and education system, close the land borders and keep them captive, and then he talks about taking care of 40 million Azerbaijanis living in the world.”