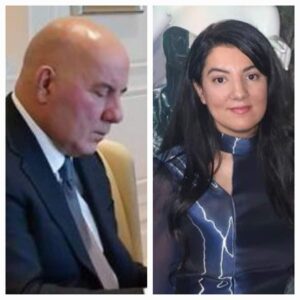 “For many years, the Azerbaijani government has been openly harassing, blackmailing the migrants in Europe, and arrested its political rivals with the help of corrupt Interpol.”

Former prisoners say that LGBTQ+people have been discriminated against in Azerbaijani prisons. A trans woman Aydan Pashayeva spent about five years in prison, where she was subjected to discrimination and violation of her rights. The former prisoner says that the head of the prison sold her for 500 manats. Human rights activist Fuad Ahmadli confirmed the allegations saying that there are separate barracks for homosexuals in prisons. “These barracks are inhabited by homosexuals, and they are treated inhumanly by the prison staff and the other prisoners who were arrested for grave crimes,” said Ahmadli.

Chairperson of Citizen and Development Party Ali Aliyev was sentenced to another month in prison on the same charges, and as a result, his detention was extended from five to six months. Heads of opposition parties and activists condemned the court decision and demanded the immediate release of Aliyev, who has been recognized as a political prisoner.

Exiled journalist Afgan Mukhtarli reported that French police are conducting a special operation across Europe, including the city of Nantes. According to Muktarli, a number of Azerbaijanis abroad have been arrested, and the police are searching for the rest of the people who are accused of threatening Azerbaijani activists and dissidents abroad. Mukhtarli wrote: “The detainees are accused of plotting to assassinate activist Mohammad Mirzali, harassing and threatening other opposition figures. All over Europe, criminal groups that receive money from the Azerbaijani government and those who are considered to control those groups are being searched by the police. The next target will be “political” immigrants- the asylum seekers who take money from Ilham Aliyev and propagandize the Aliyev regime abroad. Although they may not be arrested, they will be sent to Baku in the arms of their beloved master. For years, the Azerbaijani government has been openly harassing, blackmailing the migrants in Europe, and arrested its political rivals with the help of corrupt Interpol. As attitudes toward dictators change around the world, Aliyev‘s positions will be shattered.”

Chairperson of NCDF Jamil Hasanli said that “networked corruption is a form of existence of the Aliyev regime,” criticizing the lack of transparency of the construction works in Karabakh. Hasanli wrote: Last year, 2.2 billion state funds were spent to restore the liberated territories. However, there is no report on where and how such a vast amount of public money is spent. No information about transparency, no information about open tenders have been released. Where there is no transparency, there is corruption. For example, the construction of a “smart village” in Zangilan was given to a company named after the brother of the deputy president. Other projects are more or less divided among the ruling elite. The website of the State Procurement for the construction of Fizuli International Airport as the largest project of the restoration period does not contain any tender information on the companies involved in the implementation of this mega project and the budget of the projects they implement. In fact, the whole picture will be clear if the names of the companies involved in the reconstruction projects in Karabakh are announced. They simply distribute state-funded projects among their companies and plunder the funds allocated for restoration. Because organized corruption is a form of existence for the Aliyev regime. State orders have become a mechanism for looting the budget for the ruling family and the ruling elite.”

Chairperson of ADWP Gubad Ibadoghlu also criticized the government’s policy in the Karabakh region, saying that changing territorial names without the knowledge of residents is against the constitution. Ibadoghlu wrote: The head of state is determined to change the existing administrative-territorial division and unite territorial units (districts, cities, urban districts, settlements, villages), without any public discussion, without studying the views of the people living in Karabakh. The master plans of Aghdam and Fizuli, which have been prepared so far, are based on this principle – the connection of the surrounding villages to the regional centers. Unification of the planned territorial units in Karabakh must be carried out by the parliament on the basis of the petition of the President of the Republic of Azerbaijan in accordance with the Law of the Republic of Azerbaijan “on Territorial Structure and Administrative Territorial Division”.

The complete list of confiscated properties belonging to the former head of the Neftchala District Executive Power Ismail Valiyev, who was arrested, has been published. The Lankaran Court of Grave Crimes ruled that the civil claim of DOST Business Center LLC was upheld. According to the verdict, 12 of Valiyev’s properties were confiscated to be added to the state use.

An investigation was launched after the protests on social media regarding controversial apartment sales. Five hundred apartments were sold in 4-5 seconds during the sale of flats held by MIDA (State Agency for Housing Construction). Six people have already been arrested. They are accused of interfering in the MIDA system and face up to 4 years in prison. The price of apartments in Baku and the price of construction materials imported from Russia to Azerbaijan rose.

Meydan TV reported that Gunel Rustamova, the daughter of Elman Rustamov, former chairman of the Central Bank and an adviser to the Prime Minister, who lives in the UK, owns a company with a value of 6.2 million pounds (about 14 million manats). Rustamova also has a company called ALPS in the Czech Republic and has acquired plots of land in Lipno, where luxury hotels and residential complexes are being built. Rustamova is believed to purchase the properties abroad before the devaluation in Azerbaijan in 2015.

Meydan TV reports that the residents of the village of Budug, 64 km from Guba, in the mountains, have not been able to leave the village for months. “There is no road, and the transportation service does not work,” complained the residents. The situation is extremely difficult, especially for those with disability. Nasiba Hajiyeva, who became a bedridden patient, was also deprived of her disability pension in October last year.

Activist Bakhtiyar Hajiyev urged the government that the situation of the veterans has already entered such a critical stage that it can anytime cause massive unrest. Hajiyev wrote: With a small spark, a social explosion can occur. Perhaps there are crowds of officials in comfortable, spacious, well-lit offices, counting kilograms of money, and it is impossible for them to see the reality. But for those who live among people and communicate with them, it is clear to see the upcoming tensions. If the problems of veterans are not solved in time, one day the consequences can be very bitter.”

Political commentator Arastun Orujlu said that the fines for not wearing masks should be canceled immediately.  Orujlu wrote: “at the moment, there are no more mask fines in any normal country. In Azerbaijan, this penalty is aimed at putting extra pressure on people. The government uses the most vicious methods to oppress the people. All this stems from its anti-national nature.” Activist Bakhtiyar Hajiyev also criticized the mask requirements saying that while ordinary people are fined for not wearing masks, at any government-sponsored events, masks are not required. Hajiyev wrote: “if the goal is really to provide a safe environment, then why don’t they provide it at the event of a “blogger” sent by Russia. We must start protesting against the requirement for masks. This requirement has given extra powers to the police and is annoying the citizens.”