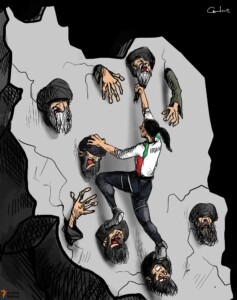 “Iran should not provoke Azerbaijan to respond to the calling of Azerbaijanis living on its southern border...”

Azadliq newspaper reports that Arif Safarov, the head of the Jalilabad District branch of the Ministry of Internal Affairs (He worked for more than 20 years in the State Traffic Police Department), brutally beat Jamal Nuriyev, a war veteran. Nuriyev served in the army during the Second Karabakh war and was severely injured.

Aghjabedi resident Faig Aliyev says that his wife, Matanat Aliyeva underwent open surgery in 25 places on her leg in 2017. With the documents received from the hospital, they applied to obtain a degree of disability for Aliyeva. Although they received a pension for several years, they were deprived of this benefit in 2021. The state medical-social expertise and rehabilitation agency reported that the assessment of Aliyeva Matanat’s disability was carried out on the basis of the referral entered into the electronic system by the medical institution without her participation. It was determined that the treatment period of the citizen in a specialized medical institution is not sufficient. For this reason, on February 4, she was given a refusal decision through the electronic system.

Elkhan Nuruyev, an active participant in the national liberation movement in the early 1990s and worked as the head of the Gubadli district Executive Power during the presidency of Abulfaz Elchibey, was detained in Poland by Interpol at the request of the Azerbaijani Government. Nuruyev immigrated to Ukraine in 1993 and received citizenship in the country. The National Council of Democratic Forces shared a statement condemning the arrest and calling for his immediate release. The statement reads: “Nuruyev joined the social and political life of Ukraine and closely participated in the processes going on in the country. He is the chairman of the Central Control Inspection Commission of the Union of Ukrainian Officers. In the early 1990s, Heydar Aliyev, who overthrew former President Abulfaz Elchibey and usurped power, took advantage of the fact that Elkhan Nuruyev was the head of the district where a crime took place and tried to associate his name with this crime in order to defame the rival political organization. The Prosecutor’s Office of Azerbaijan has since put him on an international search. However, the Ukrainian side did not accept these accusations and refused to return Elkhan Nuruyev to Azerbaijan due to their groundlessness and political nature. During these years, he traveled freely to different countries and was never detained. The National Council believes that the reason for Elkhan Nuruyev’s detention in Poland is political and related to Russia’s military aggression against Ukraine. Thus, the Azerbaijani authorities, which are allies of the aggressor Russia, did not like Elkhan Nuruyev’s activities in the field of international condemnation of the Russian occupation, organizing the defense of Ukraine, providing aid to its army, and at the same time, conducting serious propaganda in this direction among our compatriots living in this country. Therefore, in order to please and indirectly support Putin, Aliyev wants to achieve the extradition of Elkhan Nuruyev by renewing the groundless international search documents related to the criminal incident that happened 29 years ago. In addition to demanding the immediate release of Elkhan Nuruyev, we hope that the Polish law enforcement agencies will approach this issue objectively and release him.”

Residents who complained to the reception department of the Presidential Administration said that in the building that was built under the order of Vugar Zeynalov, the vice-president of the National Confederation of Entrepreneurial Organizations of Azerbaijan, none of the services, including electricity and water works properly. The department did not accept the written complaints despite the residents’ continuous demands.

The Azerbaijan Popular Front Party (APFP) decided to hold a rally in front of the Baku City Executive Authority (BCEA) on October 24, with the demand for “fundamental democratic changes”. Vahid Maharramov, member of the Presidium of the Party, informed Meydan TV about the Party’s decision. Maharramov said that radical changes mean freedom for political prisoners, free elections, freedom of assembly, and, finally, the opening of land borders. However, the Baku City Executive Authority, in its response, stated that it did not consider it appropriate to hold the rally. According to Maharamov, the executive power indicated that it would cause serious difficulties in ensuring people’s safety based on the location of an educational institution and a metro station that is more crowded.

Chairperson of APFP Ali Karimli commented on the decision to hold a rally, saying that the freedom of peaceful assembly is fundamental in ensuring the rights of the citizens. Karimli wrote on Facebook: “Imagine thousands of Azerbaijanis gathering in the central squares of the city without any police intervention, demanding from the government, for example, child support. Can the government ignore this request? Of course not. Also, it cannot ignore the other demands of the people. That is why we demand freedom of assembly. Do you know how our country will change if we only have the opportunity to hold rallies and marches freely? If it is free to hold a rally in this country, we will receive child support from the government, and we will achieve an increase in pensions, salaries, and allowances. We will release our political prisoners, and there will be free elections in this country. The most important thing is that the government comes to terms with the people. And the people feel like the real owner of the country.”

Journalist Seymur Hezi condemned the Baku City Executive Authority (BCEA)’s refusal letter saying that with this decision, BCEA deprives the citizens of their constitutional rights. Hezi Facebook post reads: “The right to free assembly cannot belong to a Party or group. If YAP (ruling New Azerbaijan Party) wants, it can hold a congress during the pandemic, but the opposition activist (member of APFP) couldn’t leave his house even with SMS permission. The ruling family can bring an Instagram phenomenon to a shopping mall and organize an event with the participation of thousands of people. But the opposition doesn’t have the right to assemble in a small group to talk about their problems. Does Ilham Aliyev want to ban politics altogether in the country? Then please make it official. Today, anyone who suppresses the freedom of assembly of the people, and discriminates against a certain social and political group, should know that they are committing a crime against the people, and it is a crime to deprive the citizens of their right to organize the source of political power and determine the politics. In other words, it is a political coup, the purpose of which is to take political power from the people. October 24th rally is completely legal, and opposing it is a clear attack against the constitution.”

Arif Rahimov, who has been the organizer of Formula 1 in Azerbaijan for seven years, has been fired. Rahimov, a British citizen, is the son of the late Azad Rahimov, the former minister of youth and sports. It is reported that Magsud Farzullayev will replace Rahimov. Farzullayev worked as an executive director at the National Gymnastics Arena. Formula 1 races have been held in Baku since 2016. The fifth race of the Formula 1 World Championship will be held on April 28-30, 2023.

On October 18, 1991, the Supreme Soviet of Azerbaijan adopted a Constitutional Act on the Declaration of Independence of Azerbaijan, which was confirmed by a referendum in December 1991. Until 2021, it was a public holiday as Independence Day. However, last year the government renamed it the day of the Restoration of Independence. The government’s decision to change the public holiday was largely criticized by the opposition.

Chairperson of APFP Ali Karimli congratulated the public on occasion and said that it was a politically motivated decision. Karimli wrote: Ilham Aliyev removed Independence Day from the list of public holidays by making it a working day. However, October 18 remains a holiday in our calendar, even though it is informal. He (Aliyev) does not celebrate this holiday as a matter of principle. He did not congratulate the nation yesterday. We know that Ilham Aliyev is especially jealous of Independence Day because none of them played a role in the struggle for independence.”

Director of Baku Research Institute, historian Altay Goyushov shared his opinion on the importance of the day, saying that if the rights of the citizens are not protected, there is no point in having a holiday of state independence. Goyushov wrote: “During the past 30 years, we could not become citizens, but we became lawless subjects of the Aliyevs. What is left to congratulate about? It is like saying  “bless you” to someone who is dead.”

Member of APFP Fuad Gahramanli argued that the reason why the current government prefers to ignore Independence Day is that none of the people who are in government today took part in the processes that led to independence. Gahramanli wrote: “No matter how paradoxical it is, those in power today, try to deny the importance of the day of restoration of the independence of the state they represent. Why? Because no one from the current ruling elite took part in those magnificent historical processes leading to independence. The adoption of the Act of Independence was possible as a result of the mass movement. Faced with intense pressure from the masses – a huge movement led by the Popular Front Party, the communist leadership at that time was forced to retreat, and the Supreme Soviet voted for the restoration of independence. Remembering this history also means accepting the living example of people’s will to power through mass mobilization. This example always scares the current government.”

Member of NCDF Tofig Yagublu Today shared a similar opinion adding that despite its attempts, the current regime will eventually give up and lose its fight against the people. Yagublu’s Facebook post reads: Today is Independence Day, one of the two biggest public holidays in our country. This great and glorious holiday is not celebrated at the state level anymore. Because, despite having the opportunity, neither Heydar Aliyev nor Ilham Aliyev had any role in gaining independence. Therefore, such a glorious and proud national holiday is despised and ignored. Moreover, the people who restored Azerbaijan’s independence are in opposition to this anti-people, robber, and illegitimate government. However, this situation is temporary. After the change of government, Independence Day will be celebrated at the state level, and of course, the fake and disgraceful Salvation Day will be canceled.”

Political analyst Arastun Orujlu said by canceling the State Independence day, the regime proves the that there is neither state nor independence. Orujlu wrote: “Today is the day of restoration of state independence of the Republic of Azerbaijan. Unfortunately, like many significant dates, this day is not officially celebrated. It seems that either we are not independent yet or we have not been able to establish a state. These are closely related notions: there is no state without independence, and there is no independence without the state.”

Rising tensions on the border with Iran

Iran started military trainings on the border with Azerbaijan. The Azerbaijani experts believe that there is no doubt that the purpose of the exercises is to put pressure on Azerbaijan. The Azerbaijani pro-government media and politicians voiced anti-Iran comments and called the ethnic Turks in northern Iran- the largest ethnic minority in the country- to be active in demanding their national rights.  Member of ruling Yeni Azerbaijan Party MP Siyavush Novruzov said that this move would only weaken Iran’s position in the light of what is happening at the moment. Novruzov wrote: “The attention of the whole world is already focused on Iran, and everyone’s conclusion is that the army cannot be used against peaceful protesters. Iran should not provoke Azerbaijan to respond to the calling of Azerbaijanis living on its southern border. Iran should know that if it takes any step against Azerbaijan, it will face the countries that are our allies – Turkey, Pakistan, Israel, and Afghanistan.”