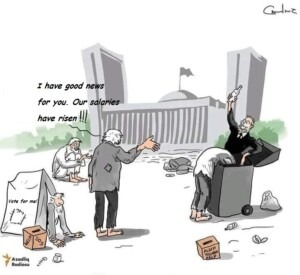 “Oil alone was not enough for them, they have seized all the fields.”

The trial of Punhan Karimli, a member of the Popular Front Party of Azerbaijan (PFPA), who lived as an immigrant in Germany for almost three years, was held on Wednesday. Karimli was deported to Azerbaijan in November 2021 and arrested two months later. On June 22, a Baku Serious Crimes Court prosecutor sentenced him to seven years and six months in prison.

Members of the Muslim Union movement tried to protest in front of the Baku Main Police Department. They organized the protest in support of Tale Bagirzadeh and other religious prisoners who are currently on hunger strike. Although the participants read the statement and wanted to submit it to the Department, the police did not allow them and demanded that they leave the area. Police prevented journalists from filming. The Interior Ministry has previously denied allegations that police tortured the detainees and insulted God. Despite his health problems, Tale Bagirzadeh said he was determined to continue the hunger strike until police officers who tortured members of the Muslim Union Movement and insulted God were punished.

Abbas Huseynov, another religious activist on hunger strike, is also said to be in critical condition. According to his family, due to hunger, his condition worsened to the point that he fainted and injured his head.

The sit-in protest in front of the German Foreign Ministry in Berlin continues. Activists and political immigrants living in Germany are demanding the punishment of police officers who insulted God and the release of all political prisoners. According to Alamdar Buniyatov, tents have been set up in front of the ministry, and the action continues day and night. The protestors started the sit-in on June 15.

Lachin residents protested against the chief executive of the Aghjabadi region. A group of residents of the Lachin region, including Karabakh veterans living in the area called Takhta Korpu, Agjabadi region, held a protest action. They protested against the arrest of Bakhtiyar Mursalzadeh, who publicized the problems of Lachin residents, including veterans. According to the protesters, Mursalzade was arrested by order of the head of the executive power Agil Nazarli for covering the problems in Lachin region.

Journalist Seymur Hezi reported that journalist Nargiz Absalamova’s journalist ID was confiscated by the police. The police tore the journalist’s ID and returned it back.

The news about the increase in the parliamentarians’ salaries stirred the debates on inequality and the rising cost of living. Chairperson of APFP Ali Karimli said that the government could find the money for senior officials but not for the families of the veterans and martyrs. Karimli wrote: “Money can easily be found to increase the salaries of parliamentarians, but not to increase the benefits of the families of martyrs and veterans. There is also money to pay off the debts of state-owned companies, which squandered the country’s national wealth. There is no money in the state budget to pay child support, while the same budget allocates 225 million manats to SOCAR, 120 million manats to Agrarkredit, 101.2 million manats to Azerenergy, and 34.8 million manats to AZAL. 493.6 million manats were found in the state budget to repay the state-guaranteed debts of a number of state enterprises (you know how these loans are spent). However, there was no money to increase pensions, benefits, and salaries at the time of inflation. The government had a surplus of 2.5 billion manats in the state budget, while the millions of poor and unemployed people who are struggling to the death in poverty and unemployment will not get a share of those billions. However, there is no doubt that some of the billions allocated from the budget under the guise of “public investment” will serve to further increase the number of the properties in London.”

Chairperson of ADWP Gubad Ibadoghlu said that as a politician and an economist, he is in favor of increasing the salaries of everyone, even the president, “on one condition that from the president to the judges and parliamentarians, each of them should publish a declaration of income and property, and show the public that they are indeed living on a salary.”

According to the independent media and the members of the opposition, the government plans to hold a new referendum later this year. The goal is to restore the proportional electoral system. Election commissions have already been instructed to start preparations, and after the referendum, early parliamentary elections will be held. It is expected that in some limited constituencies, the victory of real opposition candidates will not be hindered. Member of APFP Fuad Gahramanli argued that “by doing so, the government aims to show the West that the country is undergoing gradual democratic reforms and that the opposition is represented in parliament.”

Azadliq newspaper shared war veteran Gulu Mammadov’s letter in which the veteran described the desperate economic situation in the rural areas. Mammadli wrote: “There are 4567 villages in Azerbaijan. It is time to talk about the dilapidated material, cultural, social, scientific, emotional, and psychological environment in the country’s villages because the situation is in front of everyone’s eyes. The situation in the villages of the Aran region is even worse. A desert with dust in summer, mud in winter, with no sign of modern life, not even a single roof for basic entertainment. At best, only the teahouses in front of the small shops can remind us of modern life. There is not much in the city, but at least you can find something to do in the cities. You can’t find anything about life here in the villages. There is no need to talk about jobs. A small group of people concentrated agriculture in their hands. Oil alone was not enough for them, they have seized all the fields.”

Chairperson of ADWP Gubad Ibadoghlu touched upon the issues of war veterans. In his Facebook post, Ibadoghlu stated that there is no transparency about the reconstruction works in the liberated territories of the Karabakh region. The post read:  “In the liberated territories, the violation of the property rights of refugees continues through the illegal abolition and consolidation of administrative settlements, the erasure of villages from the map, the misappropriation of lands. Although one year and eight months have passed since the end of the war, not a single IDP has returned to their homeland. Those who sow, reap and build fertile lands in Karabakh are companies owned only by the ruling family and its immediate vicinity, which have received orders through direct procurement from the budget and operate in a non-transparent and non-accountable manner.”