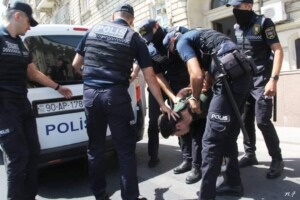 “The current regime, with its authoritarian rule, pushed the country back at least 60 years.”

Member of the Musavat Party Aziz Mamiyev, who was sentenced to 30 days of administrative arrest, was not allowed to meet his father. The union of independent lawyers Defense Line, shared a statement saying that they are extremely concerned that Mamiyev might have been tortured. His lawyer believes that the reason for Mamiyev’s detention was his harsh criticism of the government’s repressive policy, especially the activities of the police, mentioning the names of the head of state Ilham Aliyev and the Minister of Internal Affairs Vilayat Eyvazov.

Meydan TV reported that Alizamin Salayev, the imprisoned chairman of the Salyan branch of the Azerbaijan Popular Front Party, has been on hunger strike for more than ten days. Meydan TV was informed about this by the APFP.

35 years old Vusal Mammadov, a veteran of the second Karabakh war, resident attempted to commit suicide. According to the Prosecutor General’s Office, it is not known why the veteran decided to take his life, and they are investigating.

Azadliq newspaper reports that Yelo Bank gave a loan to the resident of the Astara region without his knowledge. Oruj Mammadov, a resident of Archivan village, Astara district, was shocked by the court notice when he learned that he had to pay more than five hundred manats. According to the court rule, on December 18, 2019, Mammadov took a loan of 641 manats 94 kopecks from “Yelo Bank” for a period of 60 months at 1% interest. It appears from the claim of “Yelo Bank” that the defendant has paid a certain amount from that loan and needs to pay a total of 503 manats 87 kopecks, including the main loan of 497 manats 07 kopecks. Oruj Mammadov says that not only in 2019 but in the previous years, he did not take loans from banks. He took the last loan about ten years ago. Because of the delay in the last payment, his name was put on the “black list” of banks, and he would be given a loan by any bank. Mammadov said that he was unaware of the existence of Yelo Bank in Astara. Mammadov’s father Tofig Mammadov, is a member of the APFP and argued that his son had been provoked due to his political activities.

The Ministry of Defense announced that the soldier Ibayev Kamiz Mubariz oghlu has gone missing in the direction of the Kalbajar region of the national border. Four months ago, two soldiers, Mammadov Farid and Abdullayev Firdovsi, went missing in the direction of Lachin. Although the search continues, there has not been any information about the whereabouts of the soldiers.

Meydan TV reported that a final year undergraduate student at Baku State University Ilham Ahmadov received a letter from the state service of Conscription despite the fact that Ahmadov still continues his studies. The Law “On Military Duty and Military Service” (Article 21.1.4) allows an extra period for completion of the studies in case extensions.  Ahmadov received a certificate from BSU confirming the extension of the academic deadline and submitted it to the Masalli District Branch of the State Service for Mobilization and Conscription. However, the head of the Masalli District Branch of the Service illegally refused to accept the request and threatened Ahmadov with arrest if he did not join the army.

On July 22, Azerbaijan marked the 147th anniversary of the first national printed media. At a meeting with media representatives held at the ruling party, YAP Central Office, on National Press Day, YAP Deputy Chairman, head of the Central Office Tahir Budagov said the government pays special attention to the needs of the media representatives. Both the various international statistics on media freedom and human rights observers believe that the media is not free in Azerbaijan. According to the press freedom index, Azerbaijan is behind all Central Asian republics except Turkmenistan and placed itself the 154th among 180 countries.

Chairperson of NCDF Jamil Hasanli said that today the media is not only under full control of the government but also lacks diversity and tolerance for different opinions. Hasanli wrote: “Akinchi” newspaper, published by Hasan Bey Zardabi on July 22, 1875, widely reflected on its pages the current issues of that period – problems that made people think, progressive ideas, and different views of the time. However, compared to 147 years ago, according to the current rules established by the YAP regime, there is no place for different donations or opinions in the papers published in the name of the press.”

Editor of Turan Information Agency Mehman Aliyev published an article “Hopeless future” on the occasion of National Press Day.  In his article, Aliyev criticized the Law on Media and the repressive methods of the regime to control the press. Aliyev wrote: The 2022-2023 calendar year of mass media does not bode well for the development of freedom of speech in Azerbaijan. The process of adoption of the essentially reactionary Law on Media and its provisions is a clear confirmation of the government’s efforts to strengthen state control over the mass media and not only the press but also the entire information platforms. The law, which expands the state’s shadow over the media space, opens vast opportunities for state regulation of freedom of expression, further restricts the economic freedom of the media through state intervention – registration, licensing, control, and punitive measures.”

Journalist Dashgin Aghalarli said that “there is not even a single example of independent, relatively independent, free, semi-free press, TV, and radio in the country.” According to Aghalarli,  the press is one of the most cruelly destroyed areas by the family rule of the Aliyev dynasty, and many of the people who have been subjected to political terror or killed are members of the press.

Director of Baku Research Institute Altay Goyushov also criticized the president, saying that Aliyev is personally responsible for the current state of media.  Goyushvov wrote: “Aliyev destroyed the independent media in the country, turned it completely into his personal propaganda machine, and now he is holding an international media forum in Shusha.”

Member of NCDF Gultakin Hajibeyli said that the regime’s understanding of care for media representatives is to make them more dependent on the government. Hajibeyli wrote: “There is no need to put journalists on a bus and take them to Karabakh, or to build houses for them, or to allocate money from the state budget. What media needs is freedom. It is necessary to create opportunities for free and fair competition so that the journalists can make money without needing the state. Making the journalists dependent on the state is not supporting journalists, but destroying journalism.”

Chairperson of ADWP Gubad Ibadoghlu said that the current regime, with its authoritarian rule, pushed the country back at least 60 years. Ibadoghlu wrote: “By establishing a dictatorial regime with authoritarian rule, destroying education and health system, they kept people, especially the youth, from development, destroyed the notion of freedom, and succeeded in cultivating a fragmented society with a slavish mindset. He (Aliyev) expelled smart and brilliant minds from the country and prevented the country from developing by not letting the educated and experienced people in the state and business management. This regime that has been in power for decades pushed the country back at least 60 years. In addition to the regime, the great powers that call themselves G7 are no less responsible for creating such a situation. Those states that created legal conditions for the stolen wealth of the Azerbaijani people to be transported abroad saw it as an opportunity and took advantage of it for the development of themselves and their economy. They turned a blind eye to the development of authoritarianism, which became a source of danger for the world and still facing great danger in the example of Russia.”