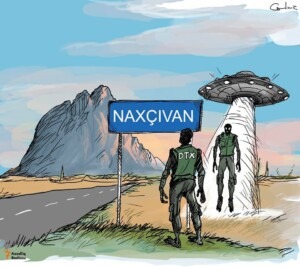 “The West knows very well that human rights are violated, and there is no rule of law in Azerbaijan…”

Human rights defender Rufat Safarov reports that the chairperson of the Muslim Union Movement Taleh Baghirzadeh was subjected to severe torture in prison. According to Safarov, Bagyrzade’s health is in serious condition, and he has started a hunger strike to protest against ill-treatment. Tale Baghirzade, who was sentenced to 20 years of imprisonment for the events of Nardaran, has been in a maximum security penal institution for seven years. On Saturday, Baghirzadeh was transferred to another penal institute, where he was tortured. His family confirmed the facts of torture. Meanwhile, Abbas Huseyn, one of the members of the Movement, was also placed in a different penitentiary institute, where he started a hunger strike in protest against the torture in prison.

Chairperson of APFP Ali Karimli addressed his followers on social media, calling for a public condemnation of torture against political prisoners. Karimli wrote on Facebook: “I strongly condemn the policy of the Azerbaijani authorities to use torture against their political opponents and political activists. We must all condemn torture. We should all together demand the Azerbaijani authorities stop this medieval anti-human means of struggle. Torturers and those who mistreat prisoners should not forget that they have committed a serious crime and must be punished for the crime.”

Karimli also reflected on the anniversary of the massive rallies in Baku 17 years ago, saying that a democratic system should be established sooner or later. Karimli wrote: Exactly 17 years ago today – on November 26, I made this speech on Victory Square and announced the decision of sit-in protest. I went to the rallies together with Mrs. Lala Shovkat. My wife, my 12-year-old son, and other relatives were also on the square. The Aliyev regime used excessive and brutal force against those who joined the protest in the square. More than a thousand protesters were beaten and seriously injured. Mrs. Lala Shovkat and I were among those who were brutally beaten. From that day on, the regime increased its terror against me. We were kicked out of the office at 33 Khagani Street. Later, the offices we rented were either shut down or blown up. A few months later, the government stripped me of my passport. Countless arrests of my family members and party members have been normalized and become a way of life. The cost of demanding freedom from the regime has always been heavy during all these times the Aliyevs have been in power. However, I am sure that no matter how difficult it may be, one day, we will regain our freedom and establish justice in this country!”

In his article written for Meydan TV, Political analyst Zardusht Alizadeh argued that the West perfectly knows the situation of human rights in Azerbaijan and that there is no rule of law: “Whether I write it or not, or other scientists and journalists write about it or not, even without us, perhaps even better than us, Western scientists and diplomats know that there is no state in Azerbaijan, and only the will of Ilham Aliyev works, not the laws of the state. They know that only Ilham Aliyev decides about the wealth of Azerbaijan, how, to whom, and how much of it is distributed. The West knows this better than anyone. They know very well that certain institutions, such as the institutions of civil society, political parties, trade unions, and NGOs were destroyed by force so that the public would easily be misled. They see that the police are beating citizens and torturing them to death on the instructions of Ilham Aliyev. They are sure that under the instructions of Ilham Aliyev, the dishonest creatures of the courts are selected and gathered to protect the rule of the ruling class and crack down on the citizens. They have no doubt that it was Aliyev who created and protects the rules and regulations that work in favor of fraudsters.”

The Minister of Finance of Nakhchivan Autonomous Republic is accused of embezzling 144 million manats. The Sabail district court of Baku city considered the petition of the investigator regarding the Minister of Finance of the Nakhchivan Autonomous Republic, Rafael Rza oglu Aliyev, in the ongoing criminal case. According to the decision of Sabail, Aliyev was placed under arrest for a period of four months. Aliyev is accused of abusing his official powers and embezzling 144 million manats of state funds. Moreover, Asgarov Mansur, head of the Customs Tariff Regulation and Payments Department of Nakhchivan’s Customs Committee, was sentenced to four months of preventive detention. He and several individuals from the Department are accused of embezzling 132 million manats of state funds. In addition to the general electronic system through which the government customs duties are cleared, the group is alleged to have created an unofficial second collection system for goods imported without clearance.

Commenting on the arrests, activist Bakhtiyar Hajiyev said those cases are only a few examples that show the scale of the corruption in public offices. Hajiyev’s Facebook posts read: “These arrests should be a lesson to those who shout “state”, “statehood” and generals who say “why don’t you stand by our state, you are on the wrong path”. The state does not exist, and there is only an organized criminal gang that can commit theft on this scale. One day, this gang will definitely eat you all one by one, take away what you have accumulated over the years, and put you in jail. Then I will remind you of the crimes you committ today.”

At an international conference hosted by ADA University in Baku, President Ilham Aliyev commented on the growing tensions with Iran, saying that Azerbaijan will do its best to protect its secular way of development and the Azerbaijanis, including Azerbaijanis living in Iran. Aliyev: “During the occupation of Azerbaijani territories, the Iranian armed forces never held any training in the occupied part of the Azerbaijani border. They could have done it. 132 kilometers of the Azerbaijani border were under occupation. This is the border between Azerbaijan and Iran. Why are there military exercises on this border today? Iranian officials, including high-ranking officials, say that Armenia’s territorial integrity is a red line for Iran. Why don’t any of them talk about us? Our territories have been under occupation for 30 years. Has anyone heard from Iranian officials that Azerbaijan’s territorial integrity is a red line for Iran? No. This is a simple question asked by the people of Azerbaijan. Not only me. I have worked with three presidents of Iran – Khatami, Ahmadinejad, and Rouhani. In all these years, a situation similar to today’s has never arisen. Iran has never held two military exercises on our border within a few months. There has never been so much hatred and threats against Azerbaijan. We have always responded and will respond to any anti-Azerbaijani statement and action. For this reason, we had to conduct military exercises on the border with Iran to demonstrate that we are not afraid of them. We will do our best to protect our way of life, Azerbaijan’s secular development, and Azerbaijanis, including Azerbaijanis living in Iran. They are a part of our nation.”

Commenting on the current state of relations with Iran, a member of APFP Fuad Gahramanli said that in case of a war in Iran, Azerbaijan should support the independence of the South Azerbaijan-northern province of Iran. Gahramanli’s Facebook post: It seems that if the regime in Iran is not overthrown through popular protests, the international coalition is planning to create a basis for military operations against this country through Azerbaijan. We should not only be a tool in this geopolitical game, but our main strategic goal should be to achieve the independence of South Azerbaijan.”

In Ganja, the announcement that the local branch of the Ministry of Emergency Situations will hire several new employees has caused violent frenzies in the crowds who flooded the building of the ministry with a hope of being recruited. Activists reacted to the incidents by criticizing the government for its failure in providing job opportunities and unfair distribution of wealth.

The prospect of peace in the South Caucasus

Chairperson of APFP Ali Karimli said that at a time when Kremlin seems to be succeeded in hindering the peace in the region, the US and EU should act immediately in order to prevent another war.  Karimli’s post: “The US and the EU can and should disrupt Putin’s scenario in the South Caucasus. It is already clear that negotiations between Azerbaijan and Armenia in the Brussels format will at least be delayed. It is now no longer realistic that a comprehensive peace agreement will be signed by the end of the year, as previously assumed. By disrupting the Brussels process, Russia has achieved temporary success. Putin is pleased. However, this does not mean that the situation cannot be changed and the Brussels process cannot be saved. Of course, it can. It is such a difficult situation that the United States should take the initiative and strengthen mediation efforts between Azerbaijan and Armenia. The failure of the four-way meeting in Brussels should not mean that the negotiation process returns to Russia’s monopoly. Even if the Brussels meeting was held on December 7, the parties would discuss the “Washington plan” there. In the new political situation, it is Washington that should take the initiative and take ownership of its own plan and break Putin‘s scenario. After a stage, the EU can also join the process through mediation by Charles Michel. It was Charles Michel who initiated the Brussels process on behalf of the EU. Diplomacy is also the ability to turn a bad situation into a good one. The main thing is that the region should not be left to Russia, and the expected peace agreement should not be replaced by a new war.”