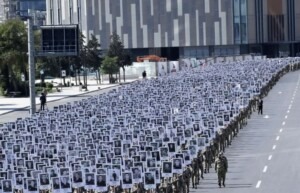 “Russia plans to expand Russian-language education in Azerbaijan and strengthen the Russian imperial policy in the region..”

One of the six people detained shortly after being deported from Germany to Azerbaijan, activist Malik Rzayev was sentenced to seven years in prison on drug charges by the verdict of the Sumgayit Court of Grave Crimes. According to the court decision, drugs were found in Rzayev’s pocket when he was detained. Rzayev denied the allegation and said that he was arrested for his severe criticism of the Azerbaijan government on social media and his active participation in the protests against violated human rights.

Two years since the start of the 2nd Karabakh war

This September marks the second year anniversary of the second Karabakh war that lasted for 44 days and took thousands of lives on both sides. Reflecting on the achievements of the war the chairperson of APFP Ali Karimli said that although the return of the Russian army to Karabakh and the indifference of the authorities to the veterans of war disappointed the public, it should not overshadow the military victory of the brave army. “Unfortunately, there was no political will to complete the great victory won by our brave soldiers on the battlefield.”

On the anniversary of the war, veteran Firudin Jeyhun Firudinli, originally from Jabrayl, committed suicide by hanging himself. He was awarded the medals “For the liberation of Jabrayil, Khojavand, and Fuzuli” and “Participant of the Patriotic War”. According to various reports, at least 44 veterans have committed suicide. Exiled journalist Afgan Mukhtarli reacted to the news of the suicide by the veteran saying that the occupied territories that were liberated by the army are now occupied by the Aliyev regime. Mukhtarli wrote: “Two years passed since the cease-fire, but the war against veterans by the Aliyev regime continues. On the 2nd anniversary of the 44-day war, our 44th veteran committed suicide. Thousands of disabled people are left without care and support, our veterans are unemployed. Instead, Ilham (Aliyev) quickly occupied the liberated territories. He creates a large “kolkhoz: the size of Karabakh, sells apartments in Agdam for 2,500 manats per square meter, and prepares to loot gold and other natural resources with his friend and brother Erdogan. He loots the state budget under the name of restoration in Karabakh. And the people of the country doze in the shadow of his iron fist.”

The private transportation companies, which carry out the majority of public transportation in Baku city and surrounding settlements, have addressed a collective appeal to the state administration. They complain about the increase in the price of diesel fuel, lubricants, tires, and other spare parts necessary for the bus vehicles and the low fares tickets. The petition states that although a part of the funds allocated by the Cabinet of Ministers for passenger transportation during the pandemic was intended to ensure the financial stability of the public transportation companies operating in Baku, these funds were not paid. The companies noted that they pay 5 percent of the income to “BakiKart”. Experts believe that public transportation fares will be raised, and the options currently being discussed are to raise the cost of one-way trips to 40 or 50 kopecks.

The Azerbaijan Popular Front Party (APPF) announced that despite the rejection by Baku City Executive Power they will hold a rally in front of the Milli Majlis on September 30 at 16:00. Vahid Maharamli, a member of the Presidium of the party, told Meydan TV that although the City Executive Authority does not consider the action appropriate, mass protests is a constitutional right. “We protest the new reactionary draft law “On Political Parties”. We will demand freedom for political prisoners, free elections, democratic changes, and the opening of borders. It is important to organize the urgent return of our compatriots living in Russia.”

Chairperson of the party Ali Karimli addressed public on Facebook calling for active participation in the protest. Karimli wrote: “We demand the total rejection of the new reactionary law on Political Parties, which is designed to abolish real opposition parties. The government wants to be content with postponing the discussion of this law. We demand the freedom of political prisoners, but the government does not consider this demand appropriate. We demand free elections in the country, but the regime does not consider free elections appropriate. We demand fundamental democratic changes in the country, but the authorities do not consider this demand appropriate. What about you? Do you consider it appropriate for the government in this country to give up its plan to destroy the real opposition, release political prisoners, start fundamental democratic changes in the country, hold free elections, and let the citizen’s voices be heard?”

The Supreme Court upheld the cassation appeal of the former national security minister of Nakhchivan AR, Vali Alasgarov. The decision of the Court of Appeal was changed, and his sentence was reduced to 6 years, 6 months, and 20 days of imprisonment. Alasgarov is expected to be released as he is considered to serve his imprisonment term. According to the reports by human rights defenders, during his tenure as a minister, Alasgarov personally was involved in the torture and severe humiliation of dozens of political prisoners. One of the inmates Turaj Zeynalov was beaten to death at the Ministry of National Security of the Nakhchivan AR.

Chairman of the Russian State Duma Vyacheslav Volodin is on official visit to Baku. The press service of the Russian State Duma released some details of the official visit. The main topic of discussion was the status of the implementation of the agreement on mutual cooperation between Russia and Azerbaijan. Volodin held discussions on the establishment of schools in Azerbaijan in accordance with Russian educational standards, the opening of branches of Russian universities, the parliamentary conference of the Caspian littoral countries, and the launching of an exhibition in Russia dedicated to the 100th anniversary of former president Heydar Aliyev.

Member of APFP Fuad Gahramanli said that Russia plans to expand Russian-language education in Azerbaijan and strengthen the Russian imperial policy in the region. Gahramanli wrote:  “Chairman of the Russian State Duma Valodin’s visit to Baku is not an ordinary visit. The main issue discussed during this visit is the state of implementation of the declaration of alliance between Azerbaijan and Russia and the expansion of Russian language education in Azerbaijan. It is regrettable that the Azerbaijani authorities are busy deepening alliance relations with Russia, which is isolated in the world and condemned as an occupying country. These relations of an alliance, in fact, mean submitting to Russia and taking vassal obligations. It is, by all means, clear that at a time when the desire to move away from Russia prevails in the entire post-Soviet space, Ilham Aliyev is discussing the expansion of Russian-language education in our country in order to deepen the Russian imperial policy in Azerbaijan. It is obvious that this (government) walks in the path of Belarus.”

Since its start in February 2022, as a result of the investigation conducted by the State Security Service one more official has been arrested regarding the allegations of corruption in the Ministry of Defense. Rashad Malekzadeh, who was the head of the financial service of the Army’s Training and Education Center, is accused of embezzling nine million manats. He was charged with Article 179.4 (embezzlement and misappropriation of funds) of the Criminal Code. At least ten high-ranking officials of the Ministry of Defense are among those arrested as a result of the investigation. The arrested officials are charged with the misappropriation of approximately 100 million manats. However, it is unknown whether the charged former officials pleaded guilty or not.