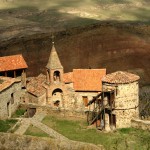 The formation of the borders of Post Soviet Azerbaijan was taking place on the basis of the borders which existed in the Soviet Union. Although Azerbaijan had the borders with the Soviet republics, these borders were of provisional nature, without any entry-resistant engineering constructions. Colonial policy of re-settlements of Tsarist Russia and Stalin’s policy of deportation were important factors in post-soviet conflicts over borders.